This Kid Stumped Santa with a Question About Immortality December 27, 2015 Hemant Mehta

This Kid Stumped Santa with a Question About Immortality

Every parent knows that if you tell your children about Santa Claus, they’ll eventually grow up and realize the story doesn’t make sense. Maybe sooner than you want them to.

I’m guessing this five-year-old’s parents didn’t expect him to poke holes in Santa’s backstory right to his face. 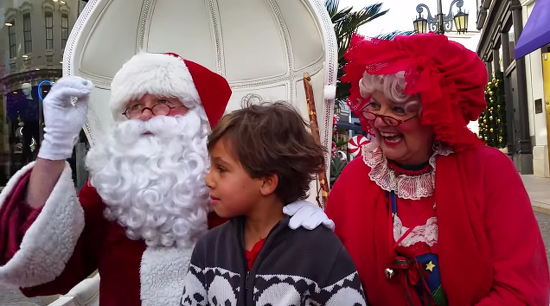 Kid: Santa, if you’re immortal, where did you live before the galaxy was formed?

Santa: Wow… *boom*… that was a very long time ago. Wait a minute! Let me get it all back! It’s coming to me! Before then, there was now. And I lived in the now before then. Do you understand that?

Kid: No. But you lived before the galaxy?

Santa: Even way back when things were forming! You know what?

Kid: Where is your sleigh parked?

Elf: I parked it on one of these rooftops, but I can’t quite remember which one…

At least the Santa attempted an explanation. Gotta give him credit for that. (The whole exchange sounds like one of Louis CK‘s extended conversations with his daughter.)

In the meantime, if this kid goes to Sunday school, I promise you it won’t be long before he’s raising his hand so much that all the other kids follow him right out of the faith.

December 28, 2015 New Study Says Vaccine Deniers Are Richer, Whiter, and More Educated
Browse Our Archives
What Are Your Thoughts?leave a comment