Thanks to Ted Cruz, a Ceremony Ending with “Hail Satan” Took Place at the Michigan State Capitol December 25, 2015 Hemant Mehta

Thanks to Ted Cruz, a Ceremony Ending with “Hail Satan” Took Place at the Michigan State Capitol

Because the supporters of Ted Cruz held a “live Nativity” on the grounds of the Michigan State Capitol earlier this month, the door was open for any group to stage a live demonstration!

That’s why The Satanic Temple held the “nation’s first state-sanctioned Satanic Ceremony in history” in the same space on Saturday night. The main speech, given by the Temple’s Detroit director Jex Blackmore, ended with a call for everyone to “Hail Satan.” A Judas Priest song closed the event as two men made out on the Capitol steps. 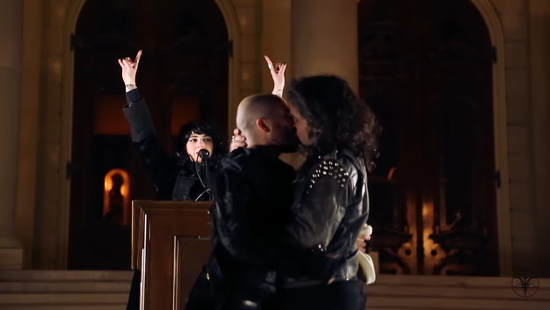 In a season when many commemorate the birth of Christ, we commemorate our own genesis — the enlightenment of all humanity, a revelation of our nature as written in the annals of history, a gift from Lucifer, the light bringer, the morning star, and the rebel.

On these very steps two weeks ago, hundreds of Christians gathered to demand exclusion of our fellow countrymen from the right to join in marriage under the guise of religious freedom. They slandered the name of this great country for embracing the diversity of its citizens. They cheered in praise when called upon to radicalize. For too many, religion has become an excuse to exclude, the hate, and to destroy one another.

It is time for us to put aside our differences and realize that we have a common problem. It matters not if you are a Baptist, a Methodist, a Muslim or the faithless.

Comrades, we are just as powerful as those who work in this institution. Those who wish to uphold the traditions of old feel us breathing down their necks, and we will continue to be the voice of reason to ensure that our America remains free and equal.

All hail the eternal rebel within all of us. To liberty, humanity and justice. To the Satanic emancipator and end of repressive traditions.

I guess we all owe Ted Cruz a debt of gratitude for opening the door so an event like this to take place.