A Houston-area mom is in a tizzy because her 7-year-old daughter came home from school with henna “tattoos” on her hands in the month of December, thus ruining Christmas. 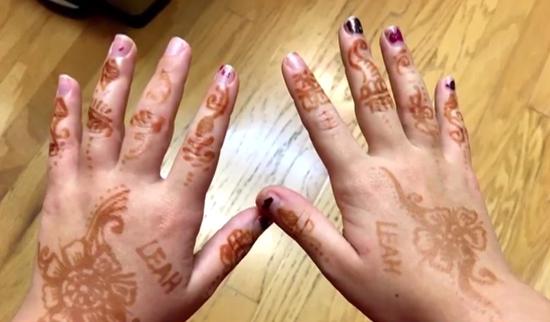 I saw her hands were decorated and asked her “What is this?” and she said “It’s henna.” I didn’t know what that was.

Okay, so apparently Tammy wasn’t a fan of Madonna or Gwen Stefani in the ’90s. But the school gave her fair warning by sending an e-mail to parents days ahead of the Multicultural Day event, explaining how students would learn about a variety of other cultures. They pointed out that students would be receiving a henna tattoo, though they didn’t mention what that meant or say that the tattoos were temporary.

Samour began researching the meaning after the fact and found ties to Hindu and Muslim faiths. (I imagine this is when her blood ran cold and Satanic chants began echoing in her head.)

Seated in front of her Pagan tree (possibly being used for Christmas purposes) and wearing an exaggerated crucifix, Tammy expressed her concern.

It’s upsetting to go through Christmas with another religion’s celebratory symbolism all over my daughter’s hands.

Exploring other cultures is a wonderful thing, but tattooing another culture’s expressions on my daughter is not acceptable.

The term “tattoo” is an exaggeration. Henna is a skin stain that lasts from a few days to a few weeks. It’s probably safe to assume the kind used at the school wasn’t as intense as, say, an Indian wedding. Leah’s henna flowers, which were applied two weeks before Christmas, will likely be long gone before the Virgin Mary even has her first contraction.

Elaina Polsen, a spokesperson for the school district, offered an apology for not being more specific in the e-mail.

This is intended to celebrate diversity and not to be divisive.

We certainly regret that we could have and we should have provided additional information as far as henna artwork.

The school has also offered to Photoshop the henna out of Samour’s Christmas photos.

Samour says she supports learning about other cultures, but she missed a great opportunity to talk about other faiths and her own. Instead she called the local news, searching for someone to blame for her failure to pay attention to her daughter’s school curriculum.

December 23, 2015
Some Australians Are "Offended" by Member of Parliament's Black Jesus
Next Post

December 23, 2015Generation Atheist is Free This Weekend
Browse Our Archives
What Are Your Thoughts?leave a comment