There’s a reality show called Allt för Sverige (Everything for Sweden) in which Swedish Americans return to their native land to learn more about their ancestry. (And somehow, people get booted off the show each week because it’s reality TV.)

Karin Berg Roylance, a Utah native who was one of the contestants this season, didn’t win, but she made an important decision during her time in Europe: She plans to leave the Mormon Church when she returns home.

Part of her decision stemmed from the realization that she was an atheist. She had grown up believing atheists were immoral heathens, but living in Sweden — a country so non-religious that sociologist Phil Zuckerman wrote a book about it — convinced her that not believing in God wasn’t so bad after all. 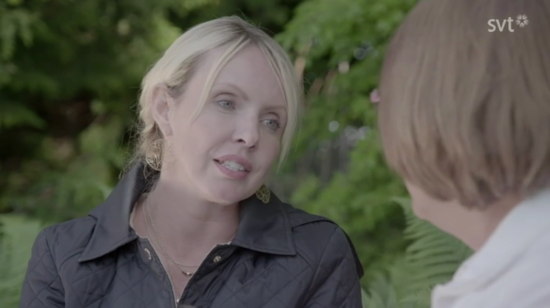 … I have been taught that atheists are bad people that don’t do good for anyone. That they’re narcissistic, self-involved, and I found the exact opposite being here in Sweden. I found the most giving, kind, responsible human beings I’ve ever met in my life, that don’t do anything because of fear, but they do it because they want to do good, which I think is a much better way to live your life.

Roylance said she had always had doubts but was taught to believe that meant there was something wrong with her.

She even pointed out some of the Mormon teachings she was eager to shed:

… It’s easy to believe in something that tells me everything that I should believe. Whether my shoulders need to be covered, how long my shorts need to be. So many people want that. And I don’t want that. And I want the same for my children. I don’t want them to believe that if they have a cup of coffee, that they’re going to be damned, that they’re not going to be able to go to Heaven.

Hey, Sweden: Stop showing off. We get it. Everything about your country is awesome. You don’t need to keep rubbing it in!

(Thanks to Jonas for the link)

December 22, 2015
A Creationist Politician Will Now Oversee Education-Related Legislation in Arizona
Next Post

December 22, 2015 Sheriff in Texas Plans to Put Christian Crosses on All Department Vehicles
Browse Our Archives
What Are Your Thoughts?leave a comment