A Creationist Politician Will Now Oversee Education-Related Legislation in Arizona

Arizona State Senator Sylvia Allen (R) is one of those people who have no business making decisions on behalf of other people because she rejects reality and wants to push her religious on everybody else.

More than five years ago, she said Earth was only 6,000 years old during a discussion about uranium mining in the state: 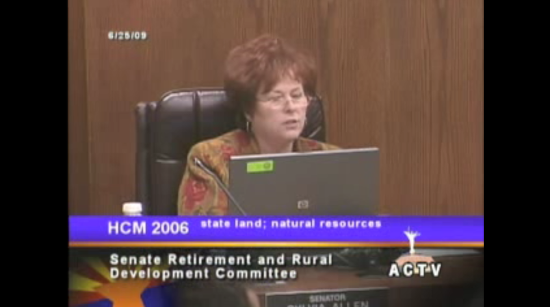 I can’t say enough [about] how it’s time that we get beyond and, and start focusing on the technology we have, and move forward into the future so that our grandchildren and, can have the same lifestyle we have, and, and, this Earth’s been here 6,000 years and I know I’m going on and on and I’ll shut up … It’s been here 6,000 years, long before anybody had environmental laws, and somehow it hasn’t been done away with. And we need to get the uranium in Arizona so this state can get the money from it, and the revenue from it, and it can be done safely, and you’ll never even know the mine was there when they’re done.

(Ironically, it’s by studying the radioactive decay of uranium that we know the Earth is more than 4,500,000,000 years old.)

She didn’t learn much over time, either. Earlier this year, Allen was discussing a bill to allow citizens to carry concealed weapons and bring them into public buildings. During that discussion, she decried the moral decay of our country and suggested offhand that the legislators should be considering another bill to fix that:

… How we get back to a moral rebirth in this country, I don’t know, since we are slowly eroding religion at every opportunity that we have. Probably we should be debating a bill requiring every American to attend a church of their choice on Sunday to see if we can get back to having a moral rebirth. That would never be allowed.

Forced church on Sunday for everyone. (Tell me again, Christians, how your religious liberty is being threatened…?)

Like I said: She has no business in elected office.

Yet for all of her “wisdom,” Allen has been rewarded by Republicans in her state with a prominent leadership position. She’ll now head up the committee that oversees education-related legislation:

Senate President Andy Biggs on Monday named Allen to lead a committee that acts as a gatekeeper for education-related legislation, such as Common Core and spending. Allen succeeds Sen. Kelli Ward, who resigned last week to run full-time in next year’s GOP primary against Sen. John. McCain.

“She understands what Arizona students and parents need in our education system,” Biggs said in a prepared statement. “She is a very experienced legislator and I know she will do a wonderful job.”

How can she possibly understand it when her most famous comments show off her ignorance? (I didn’t even mention the Facebook status update about “chem-trails.”)

Who wants to bet Arizona’s about to head down the same, sorry road as Texas? You have to feel bad for the students who are about to receive a sub-standard education thanks to elected leaders who thinks public schools are part of some liberal conspiracy.

December 22, 2015 Utah Woman, Competing on Swedish Reality Show, Says She Will Leave the Mormon Church
Browse Our Archives
What Are Your Thoughts?leave a comment