Why Atheists Must Vote 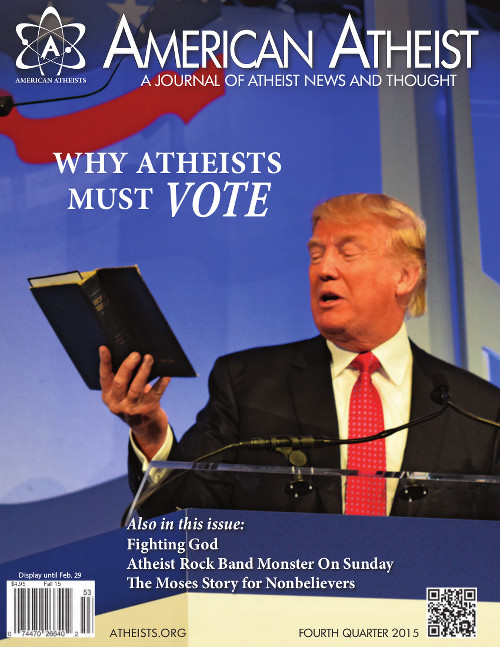 In a ballroom in a Washington, D.C., hotel, more than 2,500 people sit anxiously. There is a palpable tension in the room while the attendees wait for the next speakers to be introduced. They sit politely, applauding the few red-meat lines in Arizona Senator John McCain’s speech, but they’re not here to hear from the 2008 GOP presidential nominee; McCain has never been particularly popular with this audience.

The two speakers following McCain — Senators Marco Rubio and Ted Cruz, of Florida and Texas, respectively, both running for president in 2016 — were much more in line with the priorities of the conference attendees in the room.

For an Atheist like me, listening to the speakers at the 2015 Values Voter Summit (VVS) — held in September by the Family Research Council, Liberty Institute, and a host of other far-right religious organizations — can only be described as surreal.

The thousands in attendance, their excitement, and the number of politicians who addressed them should all cause grave concern among voters who value secular government. This is not some fringe event. The list of fifty-two speakers included most of the GOP presidential candidates, as well as Rabbi Jonathan Cahn, who talked about the rainbow image that was projected onto the White House following the U.S. Supreme Court’s decision in June to strike down the ban on same-sex marriage. He received rapturous applause when he said that the multi-colored lights were a sign of the pending apocalypse.

Rubio opened his remarks by reminding attendees that the United States was “founded on a spiritual principle, on the idea that every human being has rights that are given by God” and then reassuring them of his own Christian upbringing.

Cruz even more effectively appealed to the evangelicals in the room when he talked about visiting Kim Davis in jail. Davis is the clerk in Rowan County, Kentucky, who is refusing to issue marriage licenses to same-sex couples. “Now, six months, a year ago, if I had come and said that a Christian woman was going to be thrown in jail for living her faith, the media would have dismissed me as a nutcase. But that’s where we are today.” He quoted from the Acts of the Apostles in the New Testament, comparing his audience to the earthquake god caused in order to break open the jail cell that imprisoned Paul and Silas.

Later that day, Davis herself walked on stage to a standing ovation that lasted almost a minute and a half. She tearfully clutched an oversize bouquet of flowers as Family Research Council President Tony Perkins presented her with the Cost of Discipleship Award.

Rubio and Cruz were just two of the presidential candidates and political-power players to address the gathering of evangelicals. Rick Santorum, Ben Carson, Mike Huckabee, Bobby Jindal, Lindsey Graham, Donald Trump, and Rick Perry (who has since withdrawn from the 2016 presidential race) all took turns at the podium appealing to the faithful.

Donald Trump, in an attempt to show off his godly bona fides, proudly held up his family Bible show-and-tell style. Ben Carson, a favorite of the VVS crowd, spoke against the threat of “allowing progressives to drive God out of our land.” Mike Huckabee proposed using the Fifth and Fourteenth Amendments to completely outlaw abortion in the United States.

Also appearing on that stage was radio-talk-show host Mark Levin. Levin, in his conversation with Tony Perkins, told attendees that “secularism has become a religion.” He warned that the Supreme Court was “imposing secular Sharia.”

The simple fact that so many presidential candidates, members of Congress, and political power brokers choose to attend this event speaks to its influence and, more specifically, to the power of the voting bloc it represents.

According to the Pew Research Center, evangelical Christians made up 23% of the electorate in the 2012 presidential election — higher than their 20% representation in the total population. Simply put, evangelicals show up to the polls, and they show up to vote for Republicans.

It is clear why GOP presidential candidates come to VVS to kiss the rings of the faithful. Look at Catholic voters. Approximately 25% of the 2012 electorate was Catholic, yet Catholics make up only about 22% of the U.S. population. They have a modestly outsized impact on the election, but their voting is much more evenly split and reflective of the general election. They went for Bush in both 2000 and 2004, and Obama in 2008 and 2012.

Now let’s look at Atheist voters. To be clear, Pew only collects data on religiously unaffiliated voters, who are often called the “nones” because they check the none-of-the-above box in religion surveys. But for the purposes of political discourse, the nones are more likely to be on our side than the side of evangelicals.

In 2012, the nones represented about 20% of our nation’s population, just like the evangelicals. But how many nones showed up to vote that year? Far fewer than we’d expect. The religiously unaffiliated made up just 12% of the electorate in 2012. That’s roughly forty-five million eligible voters, but just 15.5 million of us went to the polls that year. The evangelical demographic had the same number of eligible voters, but they turned out almost thirty million votes. To put that in perspective: Barack Obama won the 2012 popular vote by just under five million votes. Non-believers underperformed by a staggering 14.5 million votes that day.

So where do those extra evangelical votes go? The overwhelming majority go to people like Ted Cruz, Mike Huckabee, and Rick Santorum. Their votes go to people who believe — as every candidate (except Lindsey Graham) who spoke at VVS believes — that public officials like Kim Davis shouldn’t have to do their jobs if there’s a religious objection. Their votes go to elected officials who court people who believe that a rainbow projected onto the side of a building is a sign of the impending apocalypse. They vote for candidates who use words like “false god” and “idol” when describing any faith other than their own. And they go to people like Ben Carson, the neurosurgeon who says that a person who accepts the concept of evolution is a person who lacks the ability to have a moral code.

The religious right likes to frame the culture wars as a fight between good and evil. They are “fighting” against “secular Sharia” that is trying to “drive God out of our land.” Their persecution complex is very real. They see their decades of cultural dominance slipping away, and it terrifies them. Their numbers are shrinking, but their voters have never been more mobilized.

The Obergefell decision, the fact that abortion remains legal in the United States, and the continued normalization of Atheism (and decline of religion) in the public sphere is a very real threat to their cultural hegemony. And, like any failing hegemon, they will do everything they can to stay in power.

Atheists and non-believers now comprise a potential voting bloc of equal size to evangelical Christians, so why have no presidential candidates ever beaten down the door to address the crowd at an American Atheists convention? The simplest answer is that we have yet to show that we are a political force. The numbers make it clear that our voters don’t get to the polls. Most politicians don’t even know we exist. But what’s more troubling is that the politicians who do know that we exist have chosen to marginalize and denigrate us in order to solidify their base. At the 2012 Republican National Convention, Marco Rubio told the crowd that “Almighty God is the source of all we have” and “faith in our Creator is the most important American value of all.”

But make no mistake: Republicans are not alone in their pandering to believers. Hillary Clinton has repeatedly told audiences that the Bible is her “biggest influence” and she finds it to be “a source of wisdom.”

Arizona Democratic Representative Kyrsten Sinema, who was first elected in 2012, was initially described as a “non-theist” but quickly backed away from the A-word after Atheist bloggers and other media reported that she would replace Pete Stark as the lone Atheist in Congress. Her communications director took reporters to task, saying that Sinema “believes the terms non-theist, Atheist, or non-believer are not befitting of her life’s work or personal character.”

The remedy for marginalization comes from a page out of the LGBT movement’s playbook: Visibility is the first step. That’s why American Atheists has launched the Atheist Voter Project (AtheistVoter.org) as a one-stop shop for Atheists to get more involved in the political process. Most politicians are experts at evading questions or sticking to their talking points, but “Why should I, as an Atheist, vote for you over any other candidate?” is not a question they hear every day. Evangelicals and other churchgoers are not shy about their religious affiliations, and we shouldn’t we be shy about our lack of it.

Just as crucially, we need to do a better job of getting our godless cohorts to the polls. We face a double challenge here. Atheists tend to skew younger. Almost one in three people under age thirty is non-religious. The only group that does as poorly as Atheists in getting out the vote? Young people.

Churches have decades of ready-built machinery that gets their members to the polls. They have a community that holds members accountable and encourages them to get out and vote. They have vans to drive people who need rides, regular meeting-places to invite candidates, and a hierarchy of authority telling them what to do—something we can’t and don’t want to replicate.

It is time to force our way back into a system that has all but pushed us out over recent decades. Sitting on the sidelines is no longer an option. We have to be in the political arena, challenging the religious demagogues who would otherwise be the only voices heard by politicians. By showing that they can never win another election without the support of the Atheists, we can move the needle on the issues that we all care about. And we can, once and for all, put an end to the notion that pandering to religion is the only way to get elected in the United States.

Take one minute today to visit AtheistVoter.org. Exercising your right to vote and holding politicians accountable is the only way for us to change our government for the better.

Nick Fish is American Atheists’ national program director. In 2008, he led voter registration and get-out-the-vote efforts in Raleigh, North Carolina, for MoveOn.org and the League of Conservation Voters.

December 21, 2015
Mark Regnerus Is Sad He’ll Never Get Another Raise
Next Post

December 21, 2015 Alabama's Abstinence-Only Sex Education Classes Are Hurting Students Across the State
Browse Our Archives
What Are Your Thoughts?leave a comment