Forget Screwing Up the Miss Universe Pageant; There Are Better Reasons to Dislike Steve Harvey

While everyone is piling on Steve Harvey for botching the most important part of the Miss Universe pageant last night, it’s important to remember that there are other (much more valid) reasons to dislike the guy.

Announcing the wrong winner was an honest mistake, but Harvey very deliberately told women they shouldn’t date atheists in a 2009 interview on The Tyra Banks Show when he was promoting his book Act Like a Lady, Think Like a Man: What Men Really Think About Love, Relationships, Intimacy, and Commitment.

At one point in the interview, he told women they needed to know certain things about the men they were dating before they pursued anything serious. That’s not bad advice. But his example? If he’s an atheist? Don’t even think about it. 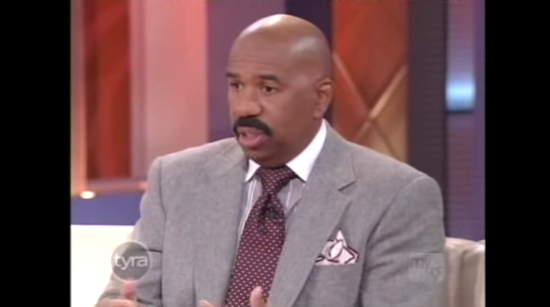 You sitting up there talking to a dude and he tells you he’s an atheist, you need to pack it up and go home. You talking to a person who don’t believe in God… what’s his moral barometer? Where’s it at? It’s nowhere. You gotta get into this stuff.

If your thinking is that shallow, then by all means: please do pack it up and go home. You deserve to be with someone who shares your warped views. If you think it’s merely a coincidence when atheists are decent, the problem is you, not them.

Harvey said atheists are “idiots” in an interview with Joy Behar, with the reasoning that atheists believe “we were evolved from monkeys,” so “why we still got monkeys?”

Then, there’s the idea that gay men aren’t “real men.”

The man is ignorant about science, bigoted toward people whose views he doesn’t understand, and homophobic. (That’s before you even get into the sexist “”all men think this way” and “all women think that way” attitudes which go far beyond a comedy bit.)

So last night was bad. But the years before that were much worse.