What Does It Really Mean That Christians Are Now More “Accepting of Homosexuality”? December 20, 2015 Hemant Mehta

What Does It Really Mean That Christians Are Now More “Accepting of Homosexuality”?

Earlier this year, the Pew Forum on Religion and Public Life released results from their 2014 Religious Landscape Study. There was so much information in it that it’s all still being parsed.

And not only do most American Christians (54%) now say that “homosexuality should be accepted by society,” that percentage goes up for just about every major denomination: 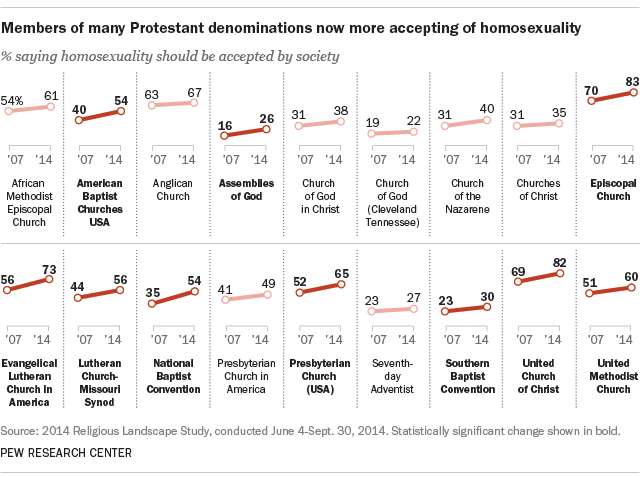 Among Christians, this trend is driven partly by younger church members, who are generally more accepting of homosexuality than their elder counterparts. For example, roughly half (51%) of evangelical Protestants in the Millennial generation (born between 1981 and 1996) say homosexuality should be accepted by society, compared with a third of evangelical Baby Boomers and a fifth of evangelicals in the Silent generation. Generational differences with similar patterns also are evident among Catholics, mainline Protestants and members of the historically black Protestant tradition.

That sounds all well and good — yay, progress! — but it doesn’t actually tell us very much. Are Christians merely admitting homosexuality is a real thing? That they should “love the sinner”? Neither question would shed much light on anything — they only point out that most Christians aren’t as bigoted on this issue as they used to be.

What we really need to know is whether Christians believe homosexuality is inherently a sin, whether they believe LGBT people deserve civil rights, and whether they support marriage equality in the eyes of the government.

I’m sure those percentages have gone up over time as well, but not nearly as much. And if that’s the case, do they really deserve any praise? To be clear, there are a lot of Christians who embrace LGBT people and support civil rights for them regardless of their theological views. But we’re not talking about the majority of Christians here, and certainly not the ones who tend to hold any sort of political or cultural power.

But for now, congratulations, gay people. More Christians “accept” you. I’m sure you’re all thrilled.

December 20, 2015
Joseph Smith and the Kinderhook Plates: This is What Mormons Believe
Next Post