Sarah Palin: I’d Only Vote for an Atheist President If the Other Candidate Supported ISIS December 20, 2015 Hemant Mehta

Sarah Palin: I’d Only Vote for an Atheist President If the Other Candidate Supported ISIS

The good news: Even Sarah Palin says she’d vote for an atheist!

The bad news: She’d only do that if the other candidate was a Muslim terrorist…

So we’re not the worst people on the planet… according to someone who makes Donald Trump seem rational by comparison.

Palin made the comments during an interview yesterday with CNN’s Michael Smerconish: 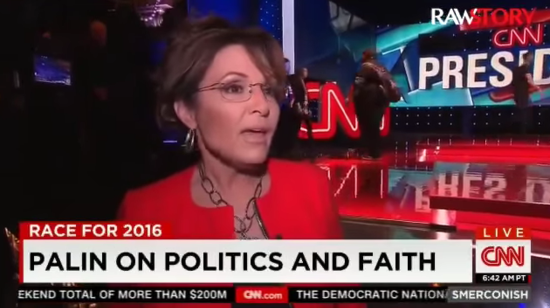 SMERCONISH: Okay, final question. This is the “gotcha” question. So I’m warning you: Could Sarah Palin — could Governor Palin — vote for an atheist who you believe had a moral compass? Maybe not a moral compass grounded in Scripture, but a person who says, “Look, you know, I’m a straight arrow. I lead my life according to a moral code. It just doesn’t have to be biblically based.

PALIN: Um, well, you know, oof, gosh. If it all came down to that versus someone who believed in a religion that was hell-bent on destroying those who didn’t agree with their religion, who would literally want to kill those, the infidels who would not say, “Okay, I’ll go along with you,” then I would.

Which means, anybody who is, in any way, sympathetic to what’s going on today [with] Muslims terrorists, who would crucify children and behead women and stop at nothing to try to destroy us and Israel and our allies, I’d choose an atheist over that!

SMERCONISH: Okay, you’re voting for an atheist over an ISIS supporter. I got you that far.

PALIN: Okay, gosh, darn it, you made it too simple, and yeah.

(Too bad Palin didn’t get the follow-up question: Would she vote for a random atheist or an Obama third term?)

At least Palin’s opinion isn’t as popular as it used to be.

In the latest Gallup poll (from June) asking whether people would vote for a President with certain characteristics, 58% of Americans said they would support an atheist candidate (assuming the person was from their party, shared their views, etc).

That’s low on the overall list — Muslims were at 60% approval — but it’s still a majority.

And if Bernie Sanders is still polling well… it means we have hope!

Then again, maybe none of this matters. I doubt an atheist candidate would be clamoring for the Palin endorsement, anyway.

December 20, 2015
How to Lie About Climate Change Using Accurate Numbers
Next Post