In a paper that’s both clever and depressing, Nicholas Matzke writes in the journal Science about how minor legislation in one Louisiana town morphed into anti-evolution legislation in a couple of big states. 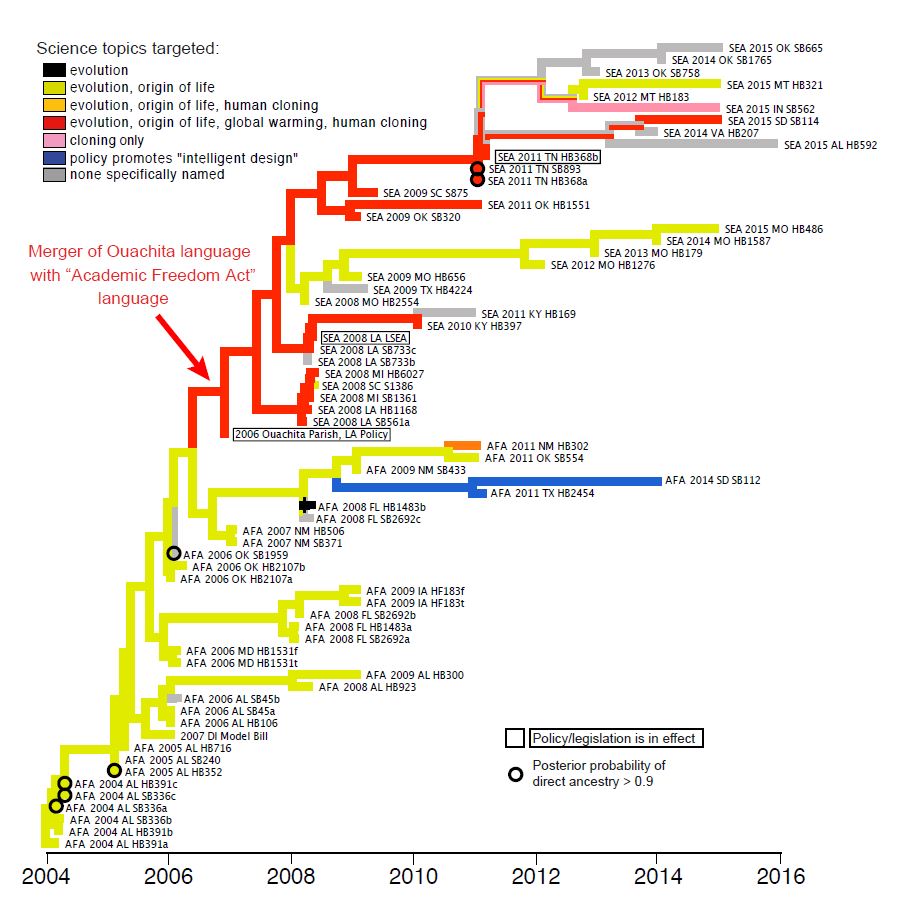 The analysis of dozens of bills introduced in state legislatures around the country reveals how a single innovation from a small Louisiana parish (population 156,325) was incorporated into 32 subsequent bills through a process the study describes as “descent with modification.” Two of those 32 bills became law and now “negatively affect science education” for students throughout Louisiana (population 4.7 million) and Tennessee (population 6.5 million).

“The creationist origins of modern antievolution strategies are clear,” according to the study by [Matzke]…

More specifically, there has long been a push by conservatives to allow science teachers to bring non-scientific theories into the classroom. How do you do that without explicitly mentioning words like “Creationism”? You say you want to introduce “academic freedom” or you want to “teach the controversy” or you want to discuss the “strengths and weaknesses” of various ideas.

It’s that “academic freedom” language that really took off in Louisiana… and then spread from there.

Overall, Matzke concludes that opponents of evolution have reinvented themselves twice over the last dozen years or so, starting with academic freedom bills and later switching to science education acts. During that time, there were also some successful innovations, such as bringing along climate change in an attempt to attract wider conservative support.

But critically, he finds that none of the bills were successful prior to the merging in of language from the Ouachita Parish education policy. That Parish, he notes, has a population of about 150,000. But its policy now influences the education of over 11 million students in two states, with more bills introduced each year.

The paper comes almost ten years to the date after the Kitzmiller v. Dover decision which said Intelligent Design was not science. And yet what Matzke shows us is that science continues to be under attack from those who refuse to accept the overwhelming evidence in support of theories like evolution and climate change.

As one form of anti-science gets shut down by the legal system, modifications are made and politicians are quick to pass another form of legislation that ultimately erodes science education in this country.

(Image via National Center for Science Education. Thanks to Daniel for the link)