At Riverheads High School in Virginia last week, World Geography teacher Cheryl LaPorte wanted to introduce students to Arabic calligraphy, so she had them copy a phrase to show off its “artistic complexity”: 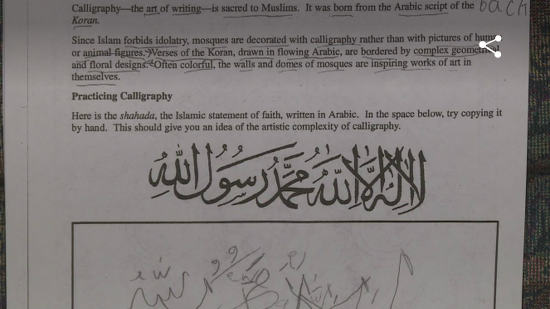 The problem is that the phrase — which was never translated on the assignment itself — actually said “There is no god but Allah, and Muhammad is the messenger of Allah.”

Did the teacher know that? It doesn’t sound like it.

Do we know where the assignment came from? Not yet, but it also includes lessons on Judeo-Christianity.

Was it an attempt to indoctrinate students? If it was, it was a pretty pathetic one since no one told the kids what the phrase said.

Is this America? Hell. Yes.

Are there a lot of conservative Christians in Virginia? You betcha.

So you know everyone took this in the worst possible way:

On Tuesday night, dozens of people met at Good News Ministries to voice their own opinion. [Mother Kimberly] Herndon has not sent her child back to school since the incident happened last week. “I will not have my children sit under a woman who indoctrinates them with the Islam religion when I am a Christian, and I’m going to stand behind Christ,” said Herndon.

Surprise, surprise. Christians taking an innocent mistake and turning it into a persecution story.

I’ll be the first to admit the teacher should have checked what the phrase said ahead of time. But the right way to handle this would be to find out what was going on and request a change in the assignment in the future. That’s it. And you know what? The parent even met with the teacher and superintendent in person! But during a follow-up meeting days later with the superintendent, the mother didn’t show. She did, however, meet with those other Christians to spread the myth about how this was Islamic indoctrination.

The superintendent attempted to correct her lies, but why would Christians like her settle for facts when the mythology confirmed whatever she wanted to believe?

To make matters worse, there were so many angry emails and phone calls stemming from these lies — egged on by professional Christian liar Todd Starnes — that all classes in the District had to be canceled today:

Augusta County Public Schools, near Staunton in central Virginia, will be closed after the district received “voluminous phone calls and electronic mail locally and from outside the area” about a high school World Geography class lesson, the district announced Thursday evening.

How’s that for an overreaction?

Again, we can all criticize the assignment together. If you want to introduce the beauty of Arabic calligraphy to students, there are better ways to do it than have them copy a statement of faith. It shouldn’t have been given to students. I assume it won’t be given again.

… and now breathe out. Because that’s about all the energy anyone should be spending on this story.

Look: There’s no Islamic revolution taking place in Virginia public schools. But apparently there are a lot of kids who need lessons in critical thinking since their parents sorely lack the skills. Today, those kids missed out on that education because a handful of parents wanted to believe a conspiracy theory.

(Screenshot via WHSV-TV. Thanks to everyone for the link)

December 18, 2015
Vatican Says That Mother Teresa, Having Worked Two "Verified" Miracles, Will Be Declared a Saint
Next Post

December 18, 2015 Illinois High School Football Coach Promises Not to Lead or Participate in Prayer with Athletes
Browse Our Archives
What Are Your Thoughts?leave a comment