Given the vandalism of atheist displays we’ve seen over the past few years, the Freedom From Religion Foundation is trying to make the most of a bad situation: They’re asking you to make a donation to the organization… but you won’t get charged anything unless one of their displays gets vandalized.

In other words, if Christians want to tear down an atheist banner, they’ll essentially be paying for even more of those banners to go up. 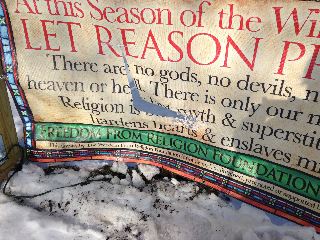 I know some people may want FFRF to purchase surveillance equipment, but that’s just not an efficient way of handling this. With all the displays they put up, there’s no way they could pay for that many cameras. And even if the cameras were to catch vandals in the act, FFRF wouldn’t necessarily have enough information to figure out who’s to blame.

That’s why this campaign may be the most effective way to deter vandals — outside of a “God is watching you” disclaimer on every sign. It may not stop all the faith-based crimes, but at least something good will come out of an otherwise awful situation.

December 18, 2015
Cutting to the Heart of Intercessory Prayer, With the New Yorker
Next Post