Dana Loesch Says Those on the “Godless Left” Have Blood on Their Hands After Terrorist Attacks December 17, 2015 Rachel Ford

Yesterday I posted about Dana Loesch‘s “Godless Left” video on NRA News; it was a fascinating trip into a bizarre, fact-free zone of religious paranoia and conservative talking points. But, sadly, it paled in comparison to the sheer nuttiness of the “Godless Left” rant she launched into on the Tuesday episode of The Dana Show. 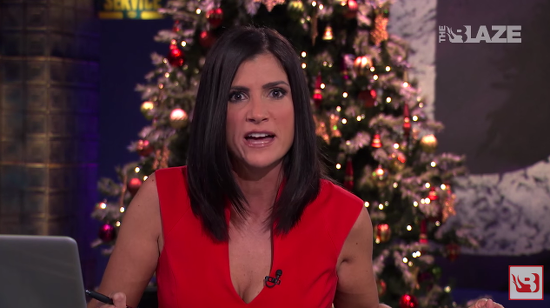 She begins by suggesting

Although Loesch means it in a pejorative fashion, I have no problem with the designation myself. It’s a pretty accurate summation of my politics and beliefs. But I’m pretty sure the many religious liberals out there — Christian and otherwise — might take issue with it. She tries to defend her use of this misnomer with the following:

You do realize that in the wake of this terrorist attack, when people were saying “our thoughts and our prayers are with those who are affected in the San Bernardino terror attack,” you had the New York Daily News, and you had elected officials, and you had journalists mocking people who were simply asking for prayers. Mocking them! “Well, we’re so glad the GOP can save everybody from ISIS with their prayers.”

As in her NRA video, Loesch completely missed (or ignored) the point of the Daily News cover and the comments to that effect: None of it was a slam on praying or people who pray, but rather a criticism of the GOP’s political paralysis in the face of mass shootings. It was a critique of people with the power to actually impact the situation yet who continually refuse to do anything about it, only offering their “prayers” and “thoughts” instead of solutions. The criticisms really said: Pray if it makes you feel good, but don’t just pray; back it up with action.

But while Loesch doesn’t seem to care about accuracy, she does propose a “solution” of her own:

Here’s an idea, how about you guys stop letting terrorists in?

Dang it, if only someone had thought of that!

How about you stop supporting policies that reduce the criteria for unvetted foreigners to get visas to come into this country, because you all have blood on their hands right now.

Still, she breathlessly reminds viewers that

It wasn’t the NRA that made the rule that we’re not allowed to look at the social media activity of people who are unvetted and coming from hotbed areas of terrorism like Tashfeen Malik.

It’s worth noting that, according to FBI chief James Comey, there’s no evidence that the San Bernardino shooters publicly advertised their admiration for jihad on social media at all. In other words, based on the evidence investigators have obtained so far, there is no reason to suspect that closer inspection of social media would have turned up anything anyway.

That’s not to say that the practice of limiting consideration of social media postings was a good one (no doubt the reason Homeland Security has been “consulting social media in reviews of immigration applications since early this year”), but to draw a link between that policy and the attacks is simply not supported by the evidence.

But why let evidence get in the way of accusations that your opponents have “blood on [their] hands”? Loesch certainly doesn’t. On the contrary, reminding viewers not to confuse the real culprit with the victim — “see [the NRA’s] Wayne LaPierre is an older white guy, [the Department of Homeland Security’s] Jeh Johnson is a younger black man” — she spends some time reiterating, with great passion, that

… it was that rule, ladies and gentleman, that very rule that allowed inside these United States Pakistani fiance visa applicant Tashfeen Malik who, by the way, was ranting on social media for years about her jihadi fetish! She was fetishizing jihadi-ism online, but because Jeh Johnson was so obsessed with political correctness and was so obsessed with optics — which I’m sure is going to be of great comfort to the 14 families who lost people in San Bernardino, I’m sure they’ll find great comfort in the fact that Jeh Johnson did all he did could to make sure that DHS was beyond reproach in the terms of political correct optics. It was him who made that decision, it was he who upheld that decision, not the NRA.

Once again, Loesch does not let reality get in the way of impassioned rhetoric, contempt-filled tones, and scowling indignation.

And she has plenty more misdirected rage to share. She is, you see, really “tired of hearing people attack the NRA.” She doesn’t blame AAA for her fender bender, so why should anyone implicate the NRA in anything? (Never mind that AAA doesn’t lobby against any and all automobile regulation, like the NRA does with gun regulation.)

Furthermore, “it is sickening” to her

I guess no one better remind Loesch of 9/11, and how a conservative government failed on the same promise.

But after minutes of energetically blaming the “Godless Left” for these tragedies — even flashing a rather chilling smirk, in discussing the “great comfort” of politically correct optics to grieving families — it’s perhaps Loesch’s most bizarre moment when she berates, in colorful terminology, those who exploit tragedies for political purposes:

I also have a major problem with all of these tragedy dry-humping whores. I do have a problem with them, and I’m not watching my language, because it’s about time that somebody call you out for what you are. You sicken me.

I’m not really sure how someone can get to the end of this kind of diatribe, displaying the eagerness Loesch displays to pin terrorism deaths on the shoulders of the “Godless Left,” and then bemoan people eager to make political use of tragedy.

Did she not listen to herself? Does she realize that other people can actually hear what she’s saying? I guess, as with her ample abuse of truth, she’s hoping her listeners won’t waste anytime thinking too deeply about what she’s said.

December 17, 2015
Tazewell (VA) School Board Members Think It's Okay to Have Pastors Deliver Invocations at Meetings
Next Post