Bill Nye Explains How to Escape from Religion

Someone asked Bill Nye how to think properly after a lifetime of indoctrination. His response was fantastic: 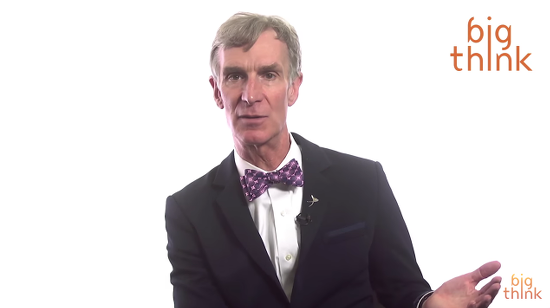 So I encourage you, when it comes to religion, is to evaluate the claims which is a big thing in skeptical and critical thinking. Somebody claims that he — it was through his mind that he was able to get the tide to go extraordinarily low at the Red Sea. It could be. It could be, but there may be other explanations. It could be that when a football player or a baseball player in the U.S. has a successful play, hits a double in a critical point in a baseball game, scores a touchdown at an opportune moment — it could be that there is a divine spirit that enables this person to do this extraordinary thing at that moment. Or it could be that the person has been practicing this for years and years and years and he was at the right place at the right time and caught the ball or hit the ball or what have you. Both are explanations for you to evaluate.

In essence, Nye says to make sure you have the best explanation for thinking a certain way. Even when religions tell you not to murder people, for example, are they telling you that for the right reason?

It’s nice to have answers, but it’s so much better when you can logically work your way toward them instead of just accepting what someone else said is true.

December 18, 2015 Forget What the Science-Deniers Say; Evolution Really Can Be Observed
Browse Our Archives
What Are Your Thoughts?leave a comment