NRA Video: The “Godless Left” Has No Values and Wants to Take Away Our Right to Survive December 16, 2015 Rachel Ford

NRA Video: The “Godless Left” Has No Values and Wants to Take Away Our Right to Survive

In a video for NRA News, Conservative pundit Dana Loesch sneered her way through a pro-gun, pro-prayer, and anti-“Godless Left” rant (which, it should be noted, seems to encompass the entire left, godless and otherwise). It touched on everything from Benghazi to healthcare, and was really quite a hodgepodge of cherished right-wing talking points.

Loesch bravely, bravely takes on a whole host of favorite conservative straw men with the requisite contempt and anger she believes they merit. She is, after all, fighting for the right to survive. Somehow. She never quite gets to the hows, but, you know, FREEDOM!!! 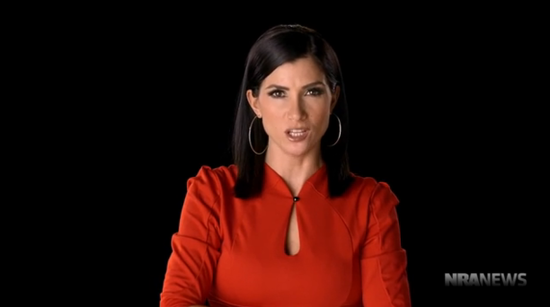 Only hours after an attack of radical jihadi terror on American soil, the New York Daily News became the loudest, vilest, most condescending voice for what many people call the Godless Left.

These false prophets at this failing excuse for a newspaper claimed to enjoy special knowledge of God’s plan somehow, even as they mocked the entire concept of religion. But they weren’t alone.

As a horrific act of terror unfolded in real time, the majority of Americans turned to earnest prayer for the dead, the wounded, their families, and the world, while political and media elites joined forces to insult and mock and disparage them. And in so doing, laid bare the utter moral depravity of the Godless Left.

This was a coordinated assault on the two freedoms they hate the most: our right to believe and our right to survive.

Right out of the gate, let’s observe a couple of the hallmarks of Loesch’s piece. First, the fact that truthiness matters more than truth. How many Americans were praying? The majority. How do we know this? Because FREEDOM AND BALD EAGLE TEARS, GOD DAMMIT!

The second, that, well, facts really don’t matter. At all.

Never mind that the Daily News’ criticism was of neither. The paper actually supports your right to survive, and the swipe at prayer wasn’t a swipe at anyone’s personal belief, but the pious lip service so many politicians offer after a tragedy in lieu of doing anything tangible to, you know, fix the problem.

But, again, let’s not allow reality to get in the way of a good, emotionally charged spiel.

Back to the rhetoric.

In the minds of millions, it brought back memories of Barack Obama sneering at the majority of Americans who cherish their faith and their firearms.

The Godless Left’s global alliance of elitists, and media activists, and Hollywood celebrities, and campus radicals, and political power mongers — they openly attack sacred American values and the people who cherish them with ruthlessness, and contempt, and downright hatred. Driven by an unholy arrogance, these saboteurs are determined to destroy our history, and eviscerate our rights, and create a new America in their own image. With no values or principles of which to speak, the Godless Left advances its power by any means necessary. Namely, shaming and silencing any dissent.

As America’s national security collapses beneath them, they come together to purge the facts and protect their agenda.

Again, there’s a stunning lack of “facts” to back up any of this. But don’t worry. Loesch has no problem letting us know just how upset these liberals make her. She’s essentially doing the very thing she’s accusing the other side of — “shaming” those she disagrees with, accusing them of hating the very things that make our country so great (including the right to survive). It’s apparently okay to say your opponents want to see Americans murdered, but don’t even think about suggesting that prayer might not be the most effective way to tackle a problem. That, my friend, would be a ruthless, contemptuous, downright hateful “coordinated assault” on freedom!

And if that rhetoric failed to convince you, don’t worry. We’re getting to the Lightning Round of talking points.

When al-Qaeda killed four Americans, the queen of the movement, Hillary Clinton, she blamed it on a video. And the media raced to protect that lie. They whitewashed the killers’ motives at the Boston marathon, and at Fort Hood. They refused to cover our utter abandonment of immigration law. They don’t report on the drug cartels and the human traffickers that have invaded our borders and imbedded in every single American city. They buried the unconscionable scandals at the VA, the weaponizing of the IRS, and the disastrous billion dollar health care website. They even excuse the outright lie of

[Video clip of President Obama saying]: “if you like your doctor you can keep your doctor.”

And as Chicago devolves into utter anarchy and a nine-year-old child is assassinated by cold-blooded killers who should have been in prison under the existing federal gun laws, the Godless Left refuses to report on its own guilt.

It’s a Gish Gallop of conservative talking points that are mostly bogus and rely on listeners never fact-checking what’s said. Like Loesch’s tone at this point, it’s all about firing the listener up so they don’t ask inconvenient things like, “hold on, what guilt?”

And now, when a radical Islamic terrorist kills 14 innocents in California they did everything possible, for as long as possible, in the face of the evidence, to sell the American people on “workplace violence” and their political Kool-Aid of so-called common sense gun laws.

[Video clip of President Obama saying]: “We also need to make it harder for people to buy powerful assault weapons.”

We saw restrained reporting in the recent Planned Parenthood shooting, too. Even after reports of the shooter’s “baby parts” comments, we were still cautioned that the motive was unknown.

On the other hand, it’s not like the Godless Left was going around spreading bogus narratives about bank robberies and “transgendered liberal activists,” either, is it?

But, again, I’m getting caught up on those pesky “fact” things. The important point is that “common sense gun laws” are crazy notions when you think about them.

[Those on the Godless Left] openly demonize Christmas and Christianity, but say nothing of the only religion in the world of the world that contains a segment which condones this terrorism.

Americans know the difference between a radical few and a peaceful majority. But through thuggish accusations of racism and xenophobia, the Godless Left has made it nearly impossible to honestly discuss the burning world that surrounds us. And in doing so, they created the environment where the San Bernardino killers’ neighbor didn’t report suspicious activity for fear of being seen as profiling.

I think it’s fair to say that Loesch doesn’t read atheist blogs. If she did, she’d know both that there’s a segment of her own faith that’s pretty keen on religious terrorism (does Robert Lewis Dear ring a bell?) and that the actual Godless Left has plenty to say about religious terrorism — Islamic as well as Christian.

Her only attempt to back any of this up comes from a few-seconds of video, where someone claims that some unspecified suspicious activity went unreported:

[Video clip]: “She was kind of suspicious and wanted to report it but she said she didn’t want to profile”.

And days later these monsters carried out their unconscionable acts of evil. As the families of the victims in San Bernardino called out to their fellow Americans for prayer, the godless left launched a vitriolic attack on the twin pillars of American freedom: the First and Second amendments. These saboteurs share the same fanatical fervor to tear apart the foundations of America as the terrorist who threaten our very survival. And together they march hand in hand toward the possible, purposeful destruction of us all. These elites of the Godless Left, they’re the infidels of freedom. And we say to them that we will never, ever sacrifice our God-given rights to believe and to survive.

I’m not sure how calling those who disagree with you “infidels” furthers your case that they, not you, are the unreasonable fanatics, but, again, I don’t think we’re supposed to think too long or hard about any of this.

As long as you walk away convinced that gun safety legislation, accessible health care, and efforts to limit discrimination are all attacks on faith, well, why waste time thinking?

December 16, 2015
Bus Driver Allegedly Told Autistic Kid She'd Be Shot with Fireballs in Hell if She Wasn't Devout
Next Post