Author Claims It’s Harder To Be an Evangelical Christian Than an LGBT Person December 16, 2015 Camille Beredjick

Ryan Anderson, a conservative author and outspoken opponent of equal rights, is the latest talking head to make the same ridiculous claim: that it’s harder to be an evangelical Christian in the United States than it is to be LGBT.

At The Atlantic‘s inaugural LGBT Summit in Washington, D.C., the magazine’s Mary Louise Kelly interviewed Anderson about civil liberties and religious freedoms, particularly when it comes to nondiscrimination protections for employees and business customers. That’s when Anderson suggested Christians have a harder time existing in the professional world than LGBT people: 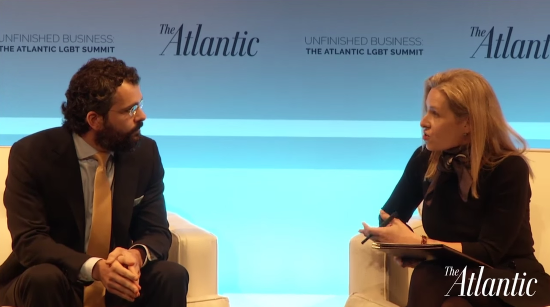 “What I see here is that if you are a conservative Evangelical at a major law firm or at an Ivy League university, you have a much harder time coming out of the closet as a conservative Evangelical than you do coming out as a gay, lesbian, bisexual or transgender,” Anderson, an Ivy League graduate, explained. “That’s an empirical question but my experience at Princeton, and that was a decade ago, that it was much more of a contentious subject to say that you were opposed to same-sex marriage than to say that you were in favor of it.”

Obviously, statistics prove Anderson incorrect. An estimated 40% of homeless youth are LGBT, largely due to family rejection. According to FBI data, in 2014, there were 1,097 incidents of hate crimes on the basis of a person’s LGBT status, compared to only 89 hate crimes targeting Catholics and Protestants. Evangelical Christians are federally protected from being fired or kicked out of their homes for their religion; no such protections exist for LGBT people being targeted for their sexual orientation or gender identity. And that’s only a handful of examples.

Nonetheless, Anderson claimed that LGBT people are so happily integrated into society that we don’t need any nondiscrimination laws on the books:

Anderson asserted that in a free society, florists, bakers and photographers have the right to run their businesses in accordance with their belief that marriage should only be between one man and one woman.

He contended that because so many other businesses are already willing to serve same-sex weddings, the marketplace serves as its own viable form of equality protection.

“What I would suggest, the protections here would be market competition,” Anderson stressed. “Already 89 percent of Fortune 500 companies have voluntarily enacted non-discrimination statutes on the basis of sexual orientation. This is working its way out on a voluntary basis.”

Trusting businesses to voluntarily protect LGBT citizens doesn’t work everywhere, though. At this point, there are too many examples to count of same-sex couples being turned away from small businesses, LGBT teachers being forced out of their jobs, and other instances where people cited religious beliefs in order to take away rights. It’s simply unacceptable.

Claiming that LGBT people have it easier than this country’s Christian majority is an offensive, incorrect, and frankly tired argument made by conservatives who have nothing left to say. It’s not going to get them anywhere. If anything, it further proves their ignorance.