This year has been a big one for LGBT rights, most notably after the Supreme Court legalized marriage equality nationwide. As huge a step as that was, LGBT advocates know there are many more hurdles to full equality, like workplace and housing protections, equal rights for transgender people, and tackling the crisis of LGBT youth homelessness.

But evangelical Christian leader James Dobson isn’t thinking about any of that other stuff. In his mind, it’s all over.

Dobson recently appeared on Andrew Wommack’s The Gospel Truth TV program, where he declared that, with the SCOTUS decision, anti-LGBT Christians have “lost the entire culture war.” 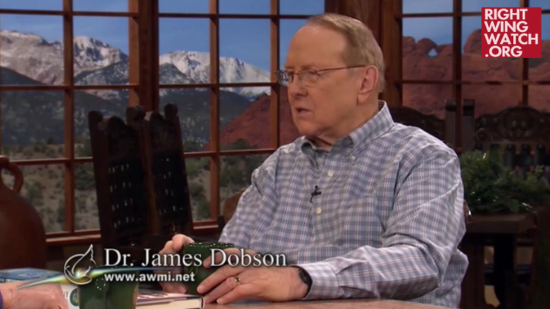 He’s right about a lot of that: Marriage equality will change the world in a lot of ways. It will affect public schools (because students will be introduced to more inclusive curriculum), and business (because same-sex couples can contribute a lot of money to the wedding industry!), and medicine (because same-sex couples will now have healthcare options, hospital visitation rights, and other benefits they were previously denied), and many, many other fields.

And every one of them is a good thing — not just for LGBT people, but for society overall.

So, that’s it?! One important mission accomplished. Does this mean we can go back to fighting for fully equal rights without interruption?

December 15, 2015
Pastor Who Says He's "Completely Disqualified" to Write About Evolution Wants It Banned in Schools
Next Post