I assume that part of the Republican platform is that if their candidates tell a lie, they have to stick with it for the duration of the campaign. Thousands of Muslims cheered in New Jersey during 9/11? Sure, why not. Pyramids built to store grain. If you say so. Planned Parenthood sells baby parts? Who cares if someone shoots up a clinic because of it.

That last lie is one that Carly Fiorina perpetuated at the first Republican debate, and she’s still standing by it despite the lie being debunked by credible organizations everywhere.

In an interview with CNN’s Chris Cuomo, Fiorina got mad at him for daring to even bring it up: 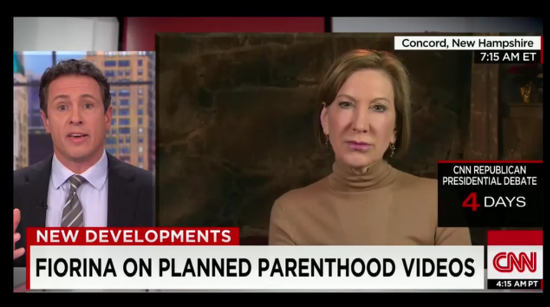 “This is a typical left-wing tactic to try and shut down the truth by silencing people. This has happened over and over and over again,” she says, adding, later, “It is unconscionable, to use your word, to deride people who are conservative their rhetoric but not to acknowledge that the left uses incendiary rhetoric all the time. It is not objective to say that the left wing does not try and shut down conversation that they don’t want to have by accusing people of inciting others… Remember Sarah Palin? Sarah Palin was somehow responsible for the murder, the attack on Gabby Gifford…”

“I don’t know anything about what you’re saying about Sarah Palin. I certainly never made that allusion,” says Cuomo.

Palin’s PAC, you might remember, sent her followers a map with the districts represented by Giffords and other Democrats represented by bullseye targets. That’s not to say she pulled the trigger, but she sure as hell nudged people to think along those lines.

Fiorina has said for months now that one of the Planned Parenthood “sting” videos featured a surgeon “harvesting the brain” of a fetus. That’s a lie.

She went on to say to Cuomo that Planned Parenthood’s recent statement that they would no longer take compensation for fetal tissue was an admission of their guilt. She neglected to mention that the compensation was never to make a profit, but to reimburse the organization for the cost of shipping the tissue to research facilities, as is customary.

Fiorina runs her campaign as well as she ran Hewlett-Packard. It’s no wonder she was considered a horrible CEO. She can’t admit defeat even when the facts are staring her in the face. She’s confident in her ignorance and she’s lashing out at anyone who dares to bring it up.