Since when did live Nativity scenes in high school holiday concerts become a thing?

A judge recently ruled that a school in Indiana could not perform the Christian myth because, obviously, it promoted Christianity at the exclusion of every other belief.

Now, a school in Chambersburg, Pennsylvania is going forward with their own version of the Bible scene because they assume the law doesn’t apply to them: 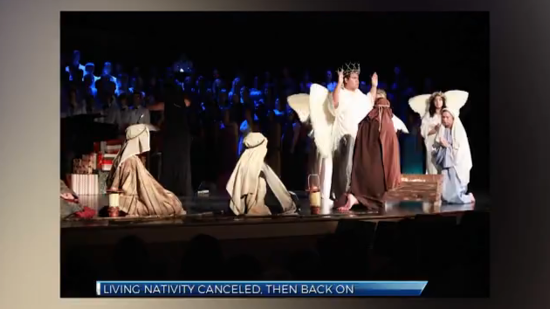 Officials in the Chambersburg Area School District had initially canceled that part of the program, but put it back in after parents who don’t understand the law pressured them into doing so:

“They get too carried away with lawsuits. Every day someone is offended by something and to me it’s just utter nonsense,” parent Michael Popkins said.

School leaders decided last night to move forward with the original plan and include the Nativity scene since the concert is a week away and glee club members have practiced for some time.

“I think it’s good. I mean, it’s been around since the 40’s and it’s never caused problems before, so I don’t know why it’s all of a sudden an issue now,” Popkins said.

“The kids worked for it, so it gives them something to look forward to,” mother Robin Winebrenner said.

The reasoning is absurd here. Just because you practiced something doesn’t give you a free pass to break the law. And maybe no one said anything in the past because, in this community, that person would be considered a pariah.

I’ve said this many times before, but if we were telling religious stories for any other religion besides Christianity, these same parents and administrators would be flipping out. They’re only offended because it’s their religious traditions that are being neutralized. That’s what Christian privilege looks like.

If they go through with it, and a lawsuit is filed, it’s the taxpayers who will ultimately have to pay for it. But these parents care more about promoting their faith through the school system than making sure their children get the best possible education with all the money available to them. It’s completely irresponsible. And it’s what we’ve come to expect from religious conservatives.

(Image via ABC 27. Thanks to Brian for the link)