See anything wrong with this picture? 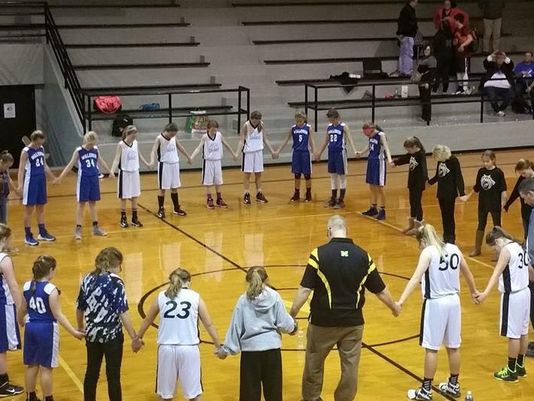 That would be Morristown Elementary School basketball coach Scott Spahr standing with his fifth and sixth grade girls as they pray. Whether he asked them to do it or joined them in their own prayer circle doesn’t matter. His presence sends the message that Christians (and only Christians) are welcome on his team and a girl stands outside the circle at her own risk.

The American Humanist Association’s Appignani Humanist Legal Center sent a letter to the District warning them about the problem and the Superintendent had no choice but to address it:

“It was perceived the coach was coercing these students,” said Shelby Eastern Superintendent Robert Evans. “I would say that was never the case. But a picture is worth a thousand words.”

“The coach graciously agreed he would step away,” Evans said. Spahr was not disciplined in any way and will continue to coach. “I appreciate Scott not wanting this to be a distraction for (the teams).”

As long as he really will step away, then this issue is resolved. Though Spahr’s public Facebook page is full of religious sentiments suggesting that he was hardly an innocent participant in these prayers. His cover photo, in fact, is that image posted above:

The Shelby Eastern Schools Parent Committee thinks this is some kind of Christian persecution:

“I don’t know a school team that doesn’t have a group of kids that pray, whether it’s well known, or in secret,” said Sarah Kramer Smith on the SES (Shelby Eastern Schools) Parent Committee Facebook page. “Why are we punishing and taking away the rights of a majority to satisfy the minority? Let’s focus on more important issues in our schools that truly need attention.”

“If students want to pray before a game, let them,” wrote Mango Esters on the SES page. “If they don’t want to, then that’s fine too.”

Since they’re ignorant on the issues, let’s correct them:

Kids are allowed to pray. No one took that right away from them.

We have laws specifically to prevent the majority from imposing their will on the minority in certain situations. A public school coach promoting religion by joining a prayer circle? That’s one of those situations.

And it’s true that students don’t have to join in the prayer circle, but when the coach is there, kids implicitly know that they’ll be punished for not falling in line. Especially before they’re teenagers, that’s just not worth the risk.

The AHA’s Legal Director David Niose also made the obvious point about how this is all accepted simply because we’re talking about Christianity:

“If that’s difficult for people to understand, just imagine a Muslim teacher or a Muslim coach leading Muslim prayers at center court,” said Niose. “I’m sure parents would be up in arms, or some would anyway.“

So the SES parents and staffers may complain, but this is a problem of their own making. They should educate themselves instead of lashing out at the people trying to protect the best interests of the children.