A Toddler Acts as Faith Healer in This Indian Ministry December 11, 2015 Hemant Mehta

A Toddler Acts as Faith Healer in This Indian Ministry

What do you do when you’re trying to promote your ministry to gullible people who may one day empty their wallets for you?

Simple. Get a cute kid to be your spokesperson.

That’s what Reverend Paul Dawson has done in Chennai (India) with the help of nearly-three-year-old Katelyn Christabel, who’s being cast as a faith-healer with all sorts of special Jesus-given powers: 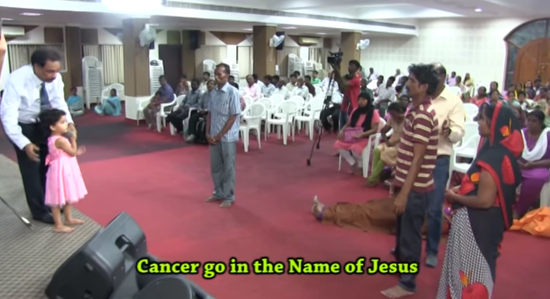 … Kateyln screams things like “I release the power” and raises her palm at disciples who enter a trance, start convulsing, and awake claiming to be healed of their indisposition.

In the videos, she supposedly cures cancer and sends people to the ground a la Benny Hinn.

There are no medical records to confirm the healings, but we know damn well that the power of coercion is strong in situations like this. With eyes and cameras on them, people with problems can bring themselves to act as if Satan is leaving their bodies… only to realize after everyone stops paying attention that their ailments are still there.

It’d be disturbing enough if Dawson was the person doing this. But to enlist a child who has no working knowledge of how this game is being played? It’s a kind of abuse that many Christians will just let slide because it confirms their beliefs.

(Thanks to @arhemant for the link)

December 11, 2015Salon Writer Misrepresents Sam Harris and New Atheism... Again
Browse Our Archives
What Are Your Thoughts?leave a comment