Sean Hannity devoted some time on his radio show Tuesday to discussing how having religious tests for (Muslim) immigrants might not be such a bad thing.

You see, it seems Hannity is a newly minted feminist and champion of LGBT rights (he stated that he must “sound like the liberal here”), because he’s so very concerned about what might happen if we accept immigrants from countries where Sharia law is practiced. 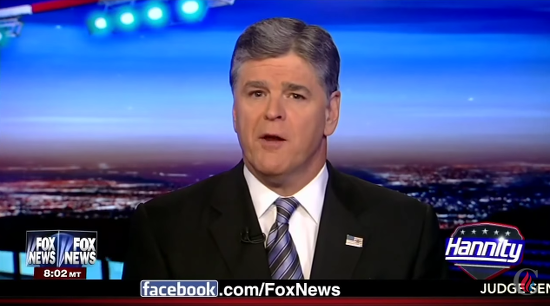 … If somebody from a country that practices Sharia wants to come to America, do we have a right to know and to vet whether or not they are bringing values that are contradictory to our constitutional republic? Do they want the breath of freedom and a better life for themselves, their daughters, their family? Or do they want to bring their values with them? And how do you ascertain that? And is asking that question really so over the top?

If those values are brought with them, are they going to treat American women this way, or treat women in their own families this way? Or gays and lesbians in their own family this way? Why is there such a denial about how Sharia law contradicts everything that we believe in our constitutional republic?

Aside from the glaring hypocrisy of Hannity objecting to people using their religious values as a weapon against other people (which Amanda Marcotte addressed in more detail at Salon), he seems to forget that, despite the best efforts of people like himself, our country is not ruled by religious law. It doesn’t matter whether something is permitted in Sharia law or not, simply because we are not governed by Sharia law. Like everyone else, Muslim immigrants are bound by secular law; their values don’t get to override that. (They’re not the Religious Right, after all).

Of course, it’s also worth noting that if Hannity was really worried about immigrants’ daughters and LGBT family members — if he was truly concerned that their rights or lives might be imperiled — then preventing them from entering a country governed by secular law would seem like precisely the wrong solution. After all, if you’re concerned that a person may be killed in a nation ruled by religious law, allowing that person into the United States might actually save his or her life. It’s not as if a father intent on honor killing, to use one of Hannity’s examples, is going to abstain from such violence in a country that allows it; on the contrary, he’ll be more likely to do so, as he can probably get away with his crime.

Much like the Right’s fear-mongering about trans women using women’s restrooms, this newfound concern with the rights of women and LGBT people is just a sad and insincere attempt to pretend that there’s some justification for discriminating on the basis of religion.

All because he cares so very, very deeply, of course.