Last month, I posted about a Nativity scene in a Wadena (Minnesota) park that had no business being there: 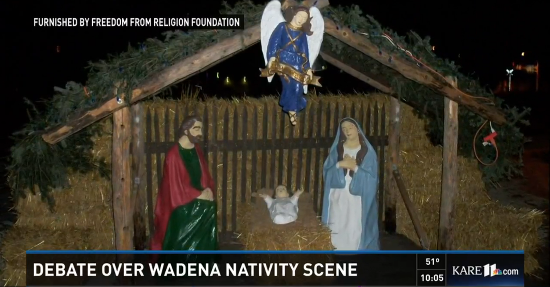 That display came down after the Freedom from Religion Foundation warned them about a possible lawsuit, leaving residents furious. In fact, they’re trying desperately to make sure this assault on Jesus backfires against atheists. How? By putting up a whole bunch of Nativity scenes outside their homes:

She says the effort is a peaceful response to political correctness run amok. The idea is getting so much traction they have considered trying to set a Guinness World Record.

If they want to put up Nativity scenes outside their homes, go for it. We won’t stop you. Atheists aren’t trying to stop people from celebrating Christmas. The only issue here was the government promoting Christianity. Once they stopped doing that, the problem was resolved. We moved on.

Everything else is irrelevant.

So if these Christians think they’re sticking it to atheists, it’s only because they don’t understand what the problem was in the first place. Their ignorance is coming across loud and clear on this Facebook page.

(Image via KARE-11. Thanks to Steve for the link)