If you want to get a marriage license in Elbert County, Colorado, you’ll have to do it while staring at a poster that says God intended marriage to be between a man and a woman (1 Corinthians 7:2).

Because now that marriage equality is legal nationwide, some Christians in government positions need a way to let gay and lesbian couples know they’re abominations. 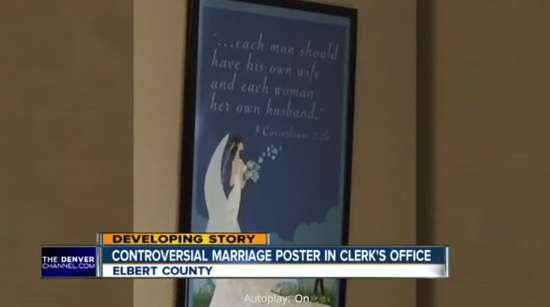 Elbert County Clerk Dallas Schroeder would not appear on camera because he has obtained outside legal counsel, but he says the poster has been up for 15 months without any complaints.

“My thought process is that they have to see the poster,” writes Schroeder in the email. “And if they choose to violate God’s written Word, then that is on their head.”

Actually, many people have complained, which is why this is now in the news. Their concern is that the government’s job is to issue marriage licenses, not cast judgment on who’s getting married. Even if the office isn’t denying those licenses to gay people, a la Kim Davis, it’s still not an appropriate venue for workers to evangelize.

And if you’re going to put up a Bible poster, at least have the guts to cite the actual verse, which is all about sex, not marriage.

… since sexual immorality is occurring, each man should have sexual relations with his own wife, and each woman with her own husband.

Is Schroeder ashamed of what the Bible says or has he just not read it?

Either way, this poster needs to come down. The Freedom From Religion Foundation has already sent Schroeder a letter to that effect.

(Screenshot via 7NEWS. Thanks to Brian for the link)

December 9, 2015
Muslim Who Led Protest Against Critic of Islam Resigns After Tweeting "Homosexuality is a Disease"
Next Post