Last year, Ohio resident Jasen Dixon put up a Zombie-themed Nativity scene at his home, only to be told he had to take it down because it violated local ordinances about size and location of such displays.

Dixon didn’t take it down, but he responded as any good internet-dweller would: He vowed to make this year’s Nativity scene bigger and better — and compliant with the law. He even started an Indiegogo campaign to raise money for his project, netting $878 in the process.

His display is finally back up! But not without controversy. 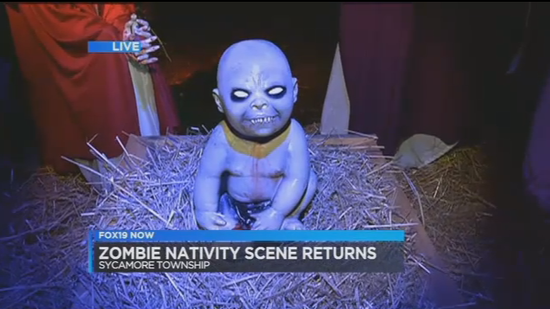 Sycamore Township officials said such a display couldn’t be larger than 200 square feet. Dixon’s is only 65 square feet. So why isn’t he in the clear?

According to Dixon, his request for a permit was denied because local authorities said his display violated the town’s zoning code by taking up more than 35 percent of his front yard.

… he thinks the council hates the zombie theme.

“I think it’s the theme,” he explained. “It just rubs people the wrong way. That’s why they’re coming down so hard on me.”

For violating the zoning code, Dixon was assessed a $500 fine on Friday. (You have to wonder if a traditional Nativity scene would have been found guilty of the same crime.)

In any case, Dixon is still posting reactions to the scene on Facebook, including this pamphlet of disapproval from local Baptists: 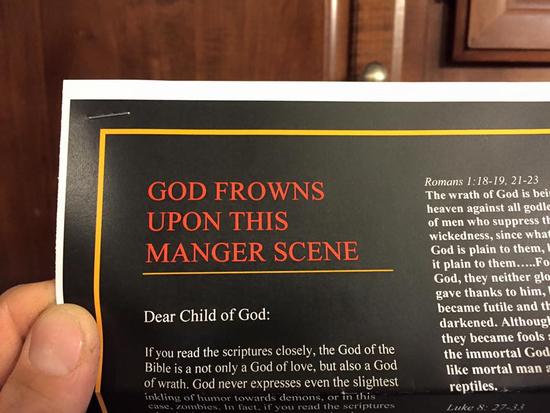 I’m sure Dixon is real scared.

For now, he says he’s removing the roof but keeping the rest of the scene in play. That should satisfy the zoning requirements. But if you’d like to chip in to help cover current and possible future fines, you can do so here.

(Screenshot via Fox19. Thanks to Chris for the link. Portions of this article were published earlier)

December 8, 2015
Ted Cruz Tells Crowd a Tale of Religious Persecution That Turns Out to Be Completely False
Next Post