On Monday morning, 50 students staged a protest outside Santa Rosa High School in Texas because one of their teachers, Charles Zeissel, had been temporarily suspended by the administration for speaking about religion in the classroom. 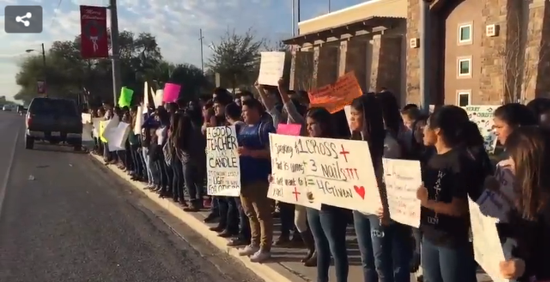 We don’t know the context or details of what he said. All we know is that he discussed God and recited Bible verses in class on Friday. It’s hard to imagine what purpose that would serve in a math classroom, but the matter was serious enough for the Superintendent to take action:

Santa Rosa ISD Superintendent Heriberto Villarreal said, “board policy does not allow the promotion of religion during class time.”

To be clear, there was no disciplinary action taken against Zeissel. It’s mostly a slap on the wrist and a warning never to do it again. Which is exactly what the District should be doing.

But the students really aren’t helping their case here. Their signs and words were explicitly pro-Christian, suggesting the punishment were perfectly appropriate:

They protested on Monday, holding signs that read, “If speaking the word of God is wrong, then I don’t want to be right” and “Freedom of Religion.”

They’re practically confirming that Zeissel did something wrong. Yes, it is wrong for a teacher to speak “the word of God” in the classroom if there’s an intent to convert.

I want to give Zeissel the benefit of the doubt since the facts of the case aren’t clear, but his students seem to be saying he was breaking the law and shouldn’t be punished for it. If that’s the case, they’re wrong, he’s wrong, and District is handling this appropriately.

December 8, 2015
Even in the South, Churches Don't Have as Much Power As They Used To
Next Post

December 8, 2015 Indiana Public School Suspension Program May Involve Community Service Projects at Local Churches
Browse Our Archives
What Are Your Thoughts?leave a comment