It’s one thing for conservative Christians to align themselves with the Republican Party. But telling everyone to carry weapons while spewing Donald Trump-style hate-rhetoric? It takes a special kind of despicable fundamentalist to stoop that low. Which is why it happened at Liberty University.

President Jerry Falwell Jr. told students at Friday’s mandatory convocation that they should all obtain permits to carry guns. Because Jesus now guides your trigger finger. If that wasn’t enough, he told them who their targets would be: 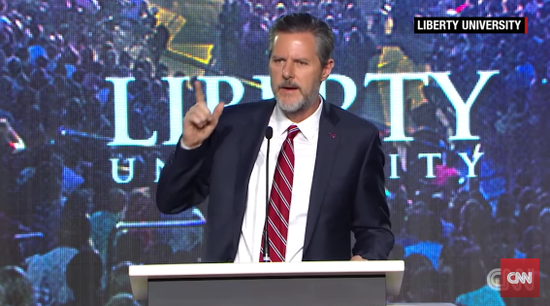 “If some of those people in that community center had what I have in my back pocket right now…,” he said while being interrupted by louder cheers and clapping. “Is it illegal to pull it out? I don’t know,” he said, chuckling.

“I’ve always thought that if more good people had concealed-carry permits, then we could end those Muslims before they walked in,” he says, the rest of his sentence drowned out by loud applause while he said, “and killed them.”

“Put your sword back in its place,” Jesus said to him, “for all who draw the sword will die by the sword. Do you think I cannot call on my Father, and he will at once put at my disposal more than twelve legions of angels?

No. Wait. That’s not it. I must be misinterpreting it.

What upsets me isn’t just that Falwell spoke so carelessly, as if all Muslims are terrorists, because it’s understood that’s he’s a bigot. (The apple didn’t fall far from the tree there.) But when the students drown him out with applause because they agree with him?

How many extremists can one school create?

Even if Falwell claims after the fact that everyone is taking him out of context — that he was only referring to violent Muslims — it doesn’t make the situation much better. His endorsement of weapons rather than suggesting students solve their problems through prayer or diplomacy tells you everything you need to know about his brand of Christianity and why decent people everywhere should stay the hell away from it. Religion is bad enough. Religion with ammunition? I don’t trust him or his followers enough to feel safe, and neither should you.

If we knew of a Muslim school in Syria where the leader said something similar, that they should all carry loaded weapons on them just in case they run into some Christians (only later would he clarify that he meant Christian terrorists), Fox News Channel would never stop covering it.

But when Jesus tells you to do it, I guess that makes it okay.

December 6, 2015
Relax and Watch This 30-Minute Video of Jesus Drinking Malbec by a Fireplace
Next Post