With Nativity Scene No Longer in Florida Capitol, (Most) Atheists Will Revise Their Plans December 5, 2015 Hemant Mehta

With Nativity Scene No Longer in Florida Capitol, (Most) Atheists Will Revise Their Plans

Last year, the Florida State Capitol Building was home to a Nativity scene, a Festivus Pole, an atheist banner, and this display from The Satanic Temple: 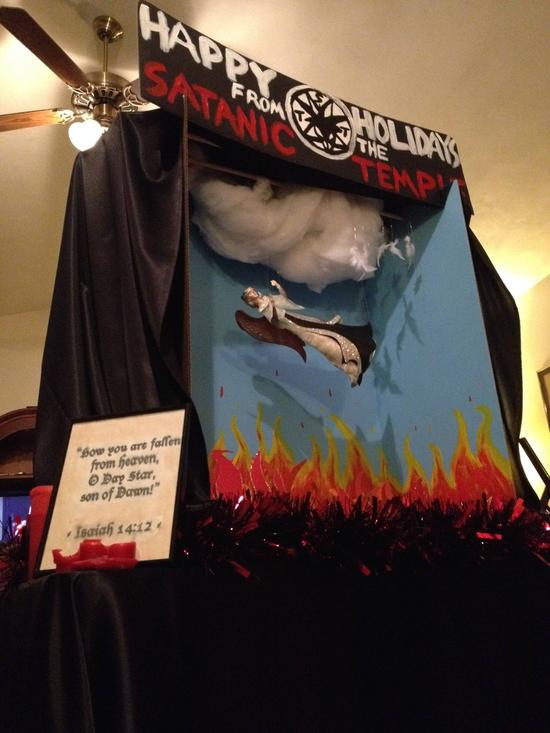 The only reason most of those non-Christian displays were there was because Capitol officials had declared the space an open forum, allowing any group into the mix. That’s a convenient thing to do when you assume only Christians will take advantage of the opportunity. But we’ve seen over the years that atheists will step in with their own requests to counter Christian displays when that occurs.

It’s like invocations prayers. Most atheists don’t want prayers at city council meetings at all, but if the law allows for it (and it does), we can’t just sit back and let Christians dominate the discussion. Might as well sign up to give our own “prayers.”

But this year in Florida, there won’t be a Nativity scene:

Florida Prayer Network President Pam Olsen said Friday in a letter emailed to the media that she decided it wasn’t the right time to have another debate over religious displays in the Capitol.

She cited the feelings of grief, anger and fear created by shootings and attacks in the United States and abroad. Olsen said not setting up the display would be a greater show of peace.

I don’t know if I believe that’s the actual reasoning — since when has tragedy ever been a reason not to inject your agenda into the conversation? — but that’s irrelevant here. I’m glad to hear she’s opting out.

So what about the atheists? Will they still put up displays?

The Satanic Temple told me that they would indeed bow out:

As the assertion of plurality is always primary in our holiday displays, and many of our activities, we feel that our Satanic Holiday displays work best in a forum where a Nativity is present. Without a nativity display we haven’t been properly motivated to apply for a display of our own. Should the decision to not set up a Nativity be reversed at any point, however, we have a beautiful display at the ready.

The Freedom From Religion Foundation had requested a permit for a display, but with the Nativity gone, they will also revise their plans (assuming no other religious display goes up):

FFRF’s position is that government property should not be used to promote religion or nonreligion. It should be neutral. We only display our counter-nativities to respond to the religious messages.

We have requested a permit and will move forward with all planning as normal, but if the nativity (and no other religious display is up) we will not be putting our display up.

Chaz Stevens, who put up the Festivus Pole last year (and got significant media coverage for it), is the only person who told me he will go ahead with his display as planned:

Jesus H. Christ, Pam Olsen took the Christ out of Christmas. Guess she wasn’t all that jazzed about a Gay War on Christmas. We’ll be sure to say a prayer for her.

As for the Gay Pride Pole in Tallahassee, our intention is still ALL GO FOR ERECTION.

He’s referring to the rainbow-colored pole he plans to put up this year. He explained to me that he wasn’t just doing it to counter Christian displays; he also wanted to make a statement in support of LGBT rights and that’s why Olsen’s decision doesn’t affect him:

It’s about saying it’s okay to be gay. It’s okay to love whoever you want. And it’s not okay to bully someone because of their sexual identity.

So you may not see a Nativity scene in the Florida Capitol this year, but the 2015 Gay Pride Festivus Pole should be up soon for those who want to air their grievances.

December 5, 2015 The Pope's Visit Cost Philadelphia Taxpayers $8 Million
Browse Our Archives
What Are Your Thoughts?leave a comment