Why “Prayer Shaming” is Justified After the San Bernardino Shootings December 4, 2015 Hemant Mehta

Why “Prayer Shaming” is Justified After the San Bernardino Shootings

As usual, the Right found a way to take a tragedy and make it all about them. 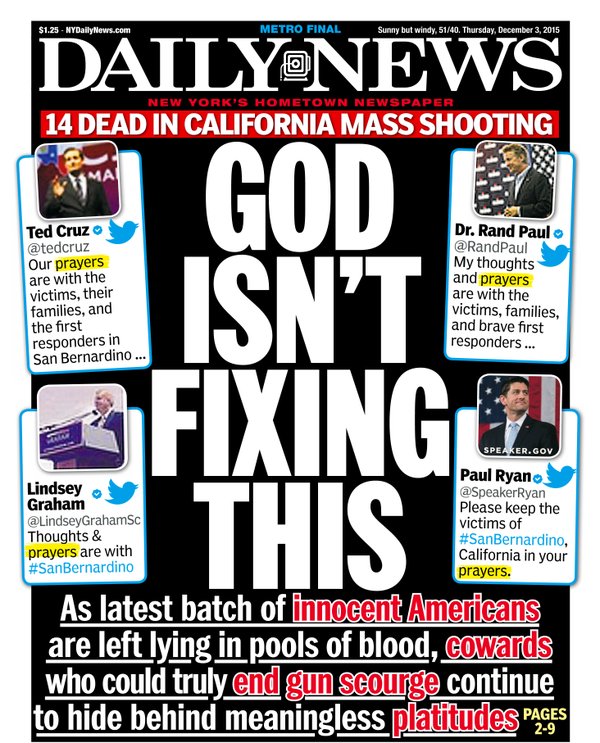 Why is that a fair cover? Because it’s criticizing politicians who love to toss out prayers and platitudes after a shooting tragedy but do nothing substantive to fix the problem. They’re using prayer as a substitute for producing and passing meaningful legislation that could prevent these massacres in the future.

Emma Green at The Atlantic called this criticism “prayer shaming,” and I thought that made sense, until I saw conservatives using the phrase as evidence of Christian Persecution. Nancy French, writing on her Patheos blog, took it a step further by calling it a “war on prayer.”

Then that’s fine. Again, the Daily News and bloggers like myself were never criticizing people for praying. If that’s how they want to grieve, so be it. The problem is the lack of follow-up by the only people who have the ability to make something happen. As many have stated already, if politicians didn’t bother taking action after 20 children died at Sandy Hook, it’s unlikely they’ll do anything after [insert the latest massacre here]. Their prayers, then, are especially hollow.

That’s the real issue here. If you want to pray and follow it up with action, I might criticize you for feeling the need to include the useless middle step, but that’s about it. To be honest, I’d probably hold back in a time like this because I know many people turn to prayer because they don’t know what else to do. I understand that.

And let’s be clear: the Democratic Presidential candidates have also said in the past that victims of various attacks were in their thoughts and prayers. But the important distinction is they’re also calling for gun safety measures.

Ruth Graham at Slate gets it exactly right:

It’s hard to imagine that even the most dedicated atheist objects to Ted Cruz kneeling by his bed at night to pray for the victims of yesterday’s shooting. What Cruz chooses to do in his bedroom is his own business. The issue is that politicians like him continue to offer thoughts and prayers and nothing else: no assault weapons ban, no universal background checks, no federal gun registry.

If you think that legislation wouldn’t help, then we can have that debate. But it’s a different conversation than the one taking place right now, which is focused on politicians who only seem to have prayers to offer.

We didn’t elect them to speak to God in times of crisis. We elected them to take steps to minimize how often we’d even need to resort to that.

December 4, 2015 Activist Maryam Namazie Heckled at Talk by Muslim Students Who Say She Invaded Their "Safe Space"
Browse Our Archives
What Are Your Thoughts?leave a comment