Yesterday, the Hawaii Supreme Court ruled against construction of one of the largest telescopes in the world, in part because it conflicted with native traditions, many of which were based entirely on superstition.

Construction on Hawaii’s Thirty Meter Telescope, which would have the ability to see 13 billion light-years away, was already postponed earlier this year because protesters believed it was being built on “sacred” land. Last month, the state’s Supreme Court temporarily suspended the permit allowing construction to continue. That suspension has now been made permanent with the Court’s decision. 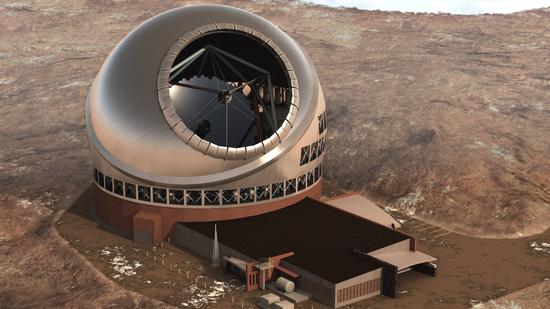 It wasn’t just about superstition, though:

Issuing the permit to construct a 180-foot high, $1.4 billion astronomical observatory on the Mauna Kea volcano on Hawaii’s Big Island did not comply with case law, statutes or the state constitution, court documents showed. It also violated the protections of native Hawaiian customs and traditions.

To understand what led up to this moment, it helps to know what critics were complaining about. According to an online petition,

Truly respecting the host culture of this land means respecting the sacred places that that culture has held in reverence for millennia. Doing so lays a good foundation for genuine healing of the longstanding historic wrongs that continue to affect the well-being of everyone in Hawaiʻi. You have an opportunity to begin a great healing process right now, and to turn the future of Hawai’i toward one that is truly pono.

We urge you to take this opportunity, for all of Hawaiʻi and the world.

A blockade was also created by protesters earlier this year to the point where workers couldn’t build anything, so construction was postponed.

“Our ancestors believed that there were numerous gods and goddesses and Mauna Kea was their temple. They feel strongly that his will disrupt their temple,” says protestor Isa Center. “In Hawaii the land is precious to our people. It’s a very strong cultural protest.”

This wasn’t just a science versus superstition debate. It was a question of clinging to knowledge of the past versus learning about the future in a way that enhanced our connection to the world. We had the possibility of learning more about how we came to be as a result of this telescope, but that potential knowledge has now been undercut by those who refused to make any sacrifices because it might have upset those who are no longer with us.

You can certainly have empathy for the indigenous culture that already feels like it’s had so much taken away from them, but their criticisms were rebutted at every turn.

There was an argument about how this telescope was being built in the “Conservation District,” which required a larger hurdle for the government to overcome before building anything on it, but they seemed to have satisfied that criteria. There was also the potential environmental impact, but the University of Hawaii said they did the research and the risk just wasn’t there:

There have been inaccurate claims made about the project recently. The most common is that TMT is a danger to the Maunakea aquifer and drinking water on Hawaii Island. Comprehensive research by expert hydrologists confirms that TMT and the existing 13 telescopes pose no such danger. Furthermore, TMT is designed to be a zero waste discharge facility with all waste securely transported off the summit. There is also very little precipitation above 8,000 feet and the observatories are located well above that at the top of Maunakea at 14,000 feet.

Those, at least, were concerns worth taking seriously because they could be assessed and quantified — and they were. This mountain was one of the few locations in the world where the telescope could be built, but superstitious beliefs about its significance got in the way. The fact that other telescopes were already nearby (making this one unnecessary) was irrelevant since none of them had the power this one would have had. The truth is that if every piece of land that was “sacred” to some group in Hawaii was off-limits, practically nothing could ever be built.

Now, the scientists will have to start the approval process all over again:

With the court’s ruling, the Thirty Meter Telescope Observatory Corporation and its board will have to start the permit process over — or, in the words of Deborah Ward, one of those who had challenged the permit in court, “take their toys and play in another sandbox.”

In a statement, officials at the University of Hawaii, which held the permit and leased the land to the telescope project, said the university was reviewing the court decision and “continues to believe that Mauna Kea is a precious resource where science and culture can synergistically coexist.”

Let’s hope it’s just a temporary obstacle. For now, superstition has played a role in blocking our understanding of reality.

***Update***: Tobin Grant of Religion News Service says that superstition wasn’t the reason for the rejection:

… The Hawai’i Constitution explicitly protects the rights of those descended from native Hawaiians:

The State reaffirms and shall protect all rights, customarily and traditionally exercised for subsistence, cultural and religious purposes and possessed by ahupua’a tenants who are descendants of native Hawaiians who inhabited the Hawaiian Islands prior to 1778, subject to the right of the State to regulate such rights.

This portion of the constitution does not give native Hawaiians exclusive control over the mountain. It simply requires that the state consider the religious purposes of the mountain before making a ruling.

Well, okay, so the Court’s decision was technically about due process. I don’t deny that. But ultimately, we’re talking about construction on a telescope being held up because the researchers and project managers didn’t properly consider the natives’ beliefs. This isn’t opposition based on evidence or argument. This is an obstacle based purely on what a group of people have long believed despite a lack of evidence. Potayto, potahto.

(Image via Wikipedia. Thanks to David for the link. Large portions of this article were published earlier)

December 4, 2015
How Atheists Can More Effectively Communicate with Believers
Next Post