I know, I know. You’re sick of Joshua Feuerstein. But as long as tens of thousands of Christians keep “liking” his rants on Facebook, people need to push back against his bullshit.

In his latest ignorant diatribe, responding to the New York Daily News‘ front page reading “God Isn’t Fixing This,” Feuerstein imagines a time when God was forced upon everybody and things were just perfect: 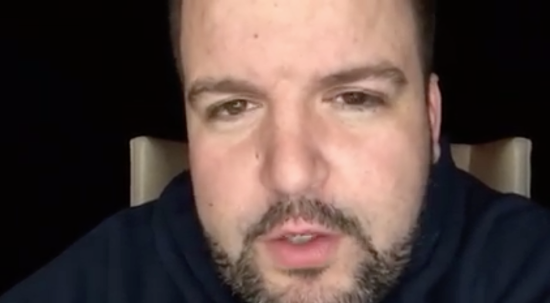 IS GOD DEAD??? Why is HE not fixing this??? You gotta watch this …. #SanBernadino #Terrorism #America

… You want to know why God isn’t fixing it? Well, simply, we kicked Him out of our country far too long ago.

You know it’s interesting that we call on God at these times and wonder where he is, and yet, we started removing him from public schools in [the] 1960s. Let me ask you this: Before the 1960s, did we have these mass shootings? Was our world falling apart? I’ll tell you why it wasn’t. Because at that time — in the 1930s, the 1940s, the ’50s, going back to the very foundation of our country — we had a Commander in Chief and his name was Jesus…

Think about it: Why is it that, in today’s schools, that kids are indoctrinated into Islam? But no longer can you even talk about Jesus? America, we have a problem.

God was never kicked out of the schools. Bible clubs are free to meet. Kids can bring their Bible to school. You can talk about religion in class. Prayer is still allowed. The only thing that happened in the 1960s is that mandatory teacher-led Christian prayers were ruled unconstitutional.

If God was kicked out of this country, it’s news to me.

Feuerstein also fails to understand that the world wasn’t better before the 1960s. I guess it’s easy to harken back to the good ol’ days when black people weren’t protected by civil rights legislation, when LGBT Americans had to remain in the closet, and when non-Christians had virtually no public voice when you’re not personally affected by it.

There are plenty of reasons the number of mass shootings has gone up in the past decade: The rise of the NRA, the lack of sensible gun control measures, a more polarized culture, a false persecution mentality spurred on by people like Feuerstein, the copycat effect, the ability to watch how much attention these shootings get, etc.

Lack of forced prayer isn’t on any rational person’s list.

And only in Feuerstein’s fantasy world are public schools indoctrinating children with Islam. He’s confusing indoctrination with educating kids on the basics of Islam, just as they’re being educated on the basics of other major world religions. It’s not surprised Feuerstein has a problem with this; education goes against everything he stands for.

Here’s a better question: How come so many Christians are willing to “Like” his posts and share his message, but so few seem to be calling him out on his lies? Is that what they teach you to do in church these days? What is wrong with them that they just accept what he spews with no regard for honesty?

If Muslims or atheists lied about Christians the way Feuerstein repeatedly does about everyone else, we’d be called a hate group. How come so many evangelicals are letting him get away with this? What are they doing to call him out on his bigotry and lies? This isn’t just some random guy; this is someone who has millions of followers online. He has a right to free speech, yes, but the lack of prominent Christian voices challenging him is noticeable and distressing. I have to assume most of them just agree with him.