Did you know that “prayer shaming” is the latest scourge to hit America? And did you realize this unacceptable behavior is a gross attack on the First Amendment?

Peggy Noonan, in the Wall Street Journal, would like to educate everyone on how serious it’s getting, with a column entitled “The First Amendment Needs Your Prayers.” 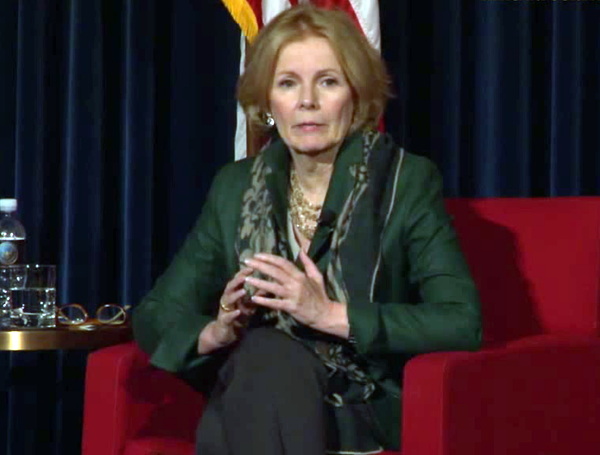 Republican presidential contestants responded online to the shootings with the only helpful thing you can say — or do, frankly, from faraway — when a story like [the San Bernardino massacre] occurs. “Praying for the victims, their families & the San Bernardino first responders,” said Jeb Bush. Mike Huckabee said he was “praying.” John Kasich: “My thoughts & prayers go out to those impacted.”

This managed to enrage the progressive left. You can take your prayers and stuff ’em. The answer and the only answer to this tragedy is gun control, and if you’re not for it you’re not allowed to be part of the conversation. “Please shut up and slink away,” tweeted a reporter. Another: “Your thoughts and prayers don’t mean a damn thing.” A reporter at the Huffington Post damned public officials’ “useless thoughts and prayers.” Markos Moulitsas of Daily Kos: “How many dead people did those thoughts and prayers bring back to the life?”

For all their ire and lack of delicate diplomatic swaddling, those are perfectly fine opinions, of course. But Noonan fears for America’s free-speech tradition if all manner of progressives and agnostics can take this provocative course without at least curtsying or blanching (I guess).

With very little rhyme or reason, she connects “prayer shaming” to the recent efforts of certain campus groups to try and shut down the debate about things like racism and sexual assault. And then she goes on to say this:

Why doesn’t some thoughtful candidate on the Republican side address the issue of shaming and silencing? Why doesn’t someone give a deep and complete speech on what the First Amendment means, how it must be protected, how we pay a daily price for it in terms of anger, hurt, misunderstandings and crudity, but it’s worth it.

Was that last sentence even edited?

Why doesn’t someone note that you fight bad speech with better speech, you don’t try to tape up the mouths of an entire country. The censorship movement is radical. It is starting to make everyone in the country feel harassed and anxious. It is odd to see candidates miss a rising issue that is giving pause to so many Americans.

I agree one hundred percent with Noonan that the best answer to bad speech is not to suppress it, but to counter it with better speech.

The rest of her complaint, about prayer being quashed? It’s hogwash. Who, precisely, is actively attempting to “silence” any of those who want to send their thoughts and prayers? It’s a giant straw man of an argument.

What it comes down to is that Noonan resents that there are now people who are brave or frustrated enough to finally point out publicly that none of those thoughts and prayers amount to a hill of beans. The way this group sees it, “sending thoughts and prayers” is literally the least one can do. It seems to them to be synonymous with insincere inaction, the kind of do-nothing response for which the offerer nonetheless claims a virtual pat on the back for showing what a good person he or she is.

Saying as much is not an attack on the First Amendment, but the proper exercise of it.

December 4, 2015
Activist Maryam Namazie Heckled at Talk by Muslim Students Who Say She Invaded Their "Safe Space"
Next Post