Back in September, the Students’ Union at Warwick University (England) decided to prevent atheist and critic of Islamic extremism Maryam Namazie from speaking at the school on the grounds that she would “incite hatred.” They eventually reversed course after criticism from all directions, and her talk was — no surprise — not hateful at all: 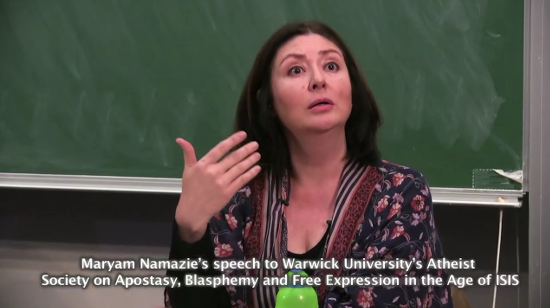 I thought that represented the worst sort of campus opposition Namazie would have to see, but what happened at Goldsmiths, University of London, where she spoke earlier this week for the school’s Atheist, Secularist and Humanist Society, was even more appalling.

On Sunday, the night before Namazie’s talk, the President of the Goldsmiths Islamic Society sent a letter to the atheist group calling her presence at the school a “violation to our safe space” and asking that the talk be canceled:

As an Islamic society, we feel extremely uncomfortable by the fact that you have invited Maryam Namazie. As you very well probably know, she is renowned for being Islamophobic, and very controversial.

Just a few examples of her Islamophobic statements, she labelled the niqab- a religious symbol for Muslim women, “a flag for far-right Islamism”. Also, she went onto tweet, they are ”body bags” for women. That is just 2 examples of how mindless she is, and presents her lack of understanding and knowledge about Islam. I could go on for a while if you would like further examples.

We feel having her present, will be a violation to our safe space, a policy which Goldsmiths SU adheres to strictly, and my society feels that all she will do is incite hatred and bigotry, at a very sensitive time for Muslims in the light of a huge rise in Islamophobic attacks.

For this reason, we advise you to reconsider your event tomorrow. We will otherwise, take this to the Students Union, and present our case there. I however, out of courtesy, felt it would be better to speak to you first.

Of course, Namazie has every right to present her case as to why Islamic cultural and religious norms are bad for women (just as Muslims who feel differently can explain otherwise). Criticizing bad ideas, even if they’re held by many Muslims, is exactly the sort of debate we ought to be having on campus. If speaking at a college violates a “safe space,” then where exactly would the Muslim group prefer she speak? They didn’t suggest an alternative venue.

For what it’s worth, no formal complaint was made to the Students Union, so maybe they were just trying to intimidate Namazie. It didn’t work. She spoke at the school, anyway.

And then this happened:

After my talk began, ISOC [Islamic Society] “brothers” started coming into the room, repeatedly banging the door, falling on the floor, heckling me, playing on their phones, shouting out, and creating a climate of intimidation in order to try and prevent me from speaking.

I continued speaking as loudly as I could. They repeatedly walked back and forth in front of me. In the midst of my talk, one of the ISOC Islamists switched off my PowerPoint and left. The University security had to intervene and remain in the room as I continued my talk.

Unbelievable. This is how low those Muslim students — and I’m referring only to the ones who participated in the attempted silencing — had to stoop. It’s the sort of reaction that only makes sense when you have no credible defense. Namazie must have been making such strong arguments that silencing her, not responding to her, was the only option they considered.

You can see what she had to deal with at the 14:40 and 35:20 marks of the video below. Take special note of the latter timestamp, when a student shuts off her Powerpoint as soon as she shows a Jesus and Mo cartoon:

Namazie, as usual, remained calm. She refused to stop speaking just because some students couldn’t handle her words.

Adding to all this frustration, the Goldsmiths Feminist Society issued a statement in defense of the interrupters:

Goldsmiths Feminist Society stands in solidarity with Goldsmiths Islamic Society. We support them in condemning the actions of the Atheist, Secularist and Humanist Society and agree that hosting known islamophobes at our university creates a climate of hatred.

To put it another way, a feminist group criticized a feminist for talking about how Islamic beliefs oppress women.

Perhaps even more disgraceful is that the Islamic society responded to all of this — their interrupting of her speech, their literal shutting down of her Powerpoint — by saying Namazie was attacking them:

Goldsmiths Islamic Society (ISOC) would like to categorically condemn the vile harassment of our ISOC members (both male and female) by the Atheist, Secularist and Humanist Society (ASH).

Muslim students who attended the event were shocked and horrified by statements made by Namazie, and peacefully expressed their dissent to the disrespectful cartoons shown of the Prophet Muhammad (pbuh). These students were subsequently made subject to unnecessary bullying, abuse and violence by the ASH society and security staff. Some students were even forcibly removed from the event.

You know why they were removed? Because they were acting in a disorderly fashion. If you acted that way at a movie theater, ruining the film for everyone else who wanted to see it, you’d get kicked out of there, too. It doesn’t mean the theater staff was “bullying” you.

At least secular groups are defending the side that supports free speech:

Stephen Evans, the National Secular Society’s campaigns manager, commented: “It’s becoming very clear that the concept of ‘safe spaces’ is being abused to the point where it is becoming a direct threat to freedom of speech. Some students may find criticism of their religion offensive, but in an open and free society that does not give them the right to close down such discussion and intimidate those expressing their views.

“We urge Goldsmiths to condemn the intolerance shown towards Maryam Namazie and make clear to its students they do not have the right not to be offended.”

It’s a sad state of affairs when college students are so unable to handle criticism of their ideas that they’re unwilling to let anyone else even hear it. That ought to be a red flag that your own ideas are worthless.

If the Muslim group had better student leaders, they would invite Namazie back and engage her in civil debate. Instead, that group, and so many others like it, are led by cowards.

To their credit, the school itself issued a kinda-sorta-defense of Namazie without ever condemning her hecklers:

A spokesman for Goldsmiths University said: “[The university] supports freedom of speech.

“The university follows a set of regulations to help ensure that freedom of speech within the law is secured for members, students and employees of the university and for visiting speakers.”

If Namazie’s talk is what it means to invade safe spaces, then let the invasions continue.

***Update***: The Goldsmiths LGBTQ+ Society is also, shockingly, siding with the Muslim students:

Following recent events on- and offline, we would like to state and show our solidarity with the sisters and brothers of our Goldsmiths ISOC

We condemn AHS and online supporters for their islamophobic remarks and attitudes. If they feel intimidated, we urge them to look at the underpinnings of their ideology. We find that personal and social harm enacted in the name of ‘free speech’ is foul, and detrimental to the wellbeing of students and staff on campus.

In our experiences, members of ISOC have been nothing but charming, patient, kind, and peaceful as individuals and as an organization.

I saw the interruptions in Namazie’s video. I would love to hear what they find “charming” and “kind” about not allowing a speaker to give her talk. This, just as with the feminist group, is pathetic and disgraceful. You’d think a group of people who know what it’s like to be marginalized would be first in line to defend a speaker whose own life is threatened because of who she is instead of siding with the people trying to shut her up.

(Thanks to Graham for the link. Portions of this article were published earlier)

December 4, 2015
Why "Prayer Shaming" is Justified After the San Bernardino Shootings
Next Post