A Reporter Bought a Bucket of Food from Televangelist Jim Bakker and Gave It a Try December 4, 2015 Hemant Mehta

As readers of this site know by now, disgraced televangelist Jim Bakker has been selling giant buckets of food on his show, telling the audience that they’ll want it for when the world collapses during the Last Days. An 8-year supply of food runs you just $2,500. 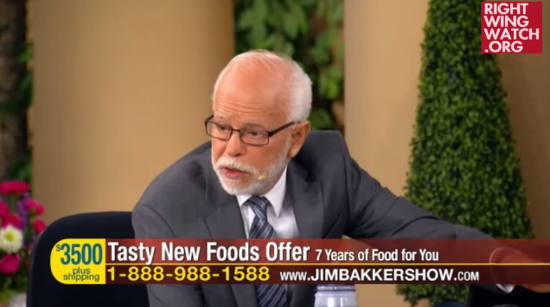 NPR’s Kylie Mohr figured that was within her budget and gave it a try.

Here at NPR, we tried the creamy potato soup, macaroni elbows and cheese powder and the chicken noodle soup. And of course we had to test the chocolate pudding for dessert.

Save for the pudding, the dishes were extremely salty and had odd, lingering aftertastes. We couldn’t agree on which was worse — the thick potato soup that felt like eating wet cement, the strong chemical overtones in the chocolate pudding or the disturbing radioactive orange of the macaroni and cheese.

To her credit, Mohr also speaks with the founder of one of the companies manufacturing this food for Bakker. He points out that, in order for the food to last decades, they have to use less tasty ingredients. But that’s not the impression you’d get from Bakker, who seems to think these are the greatest meals ever.

No word from Bakker’s people on how many buckets have been sold.