Thanks to Ted Cruz, a Satanic Snaketivity Display May Be Heading to the Michigan State Capitol December 2, 2015 Hemant Mehta

Thanks to Ted Cruz, a Satanic Snaketivity Display May Be Heading to the Michigan State Capitol

Last year, the Michigan State Capitol building gave the green light to a display from the Satanic Temple of Detroit. They had no choice, since religious groups had already put up Nativity scenes: 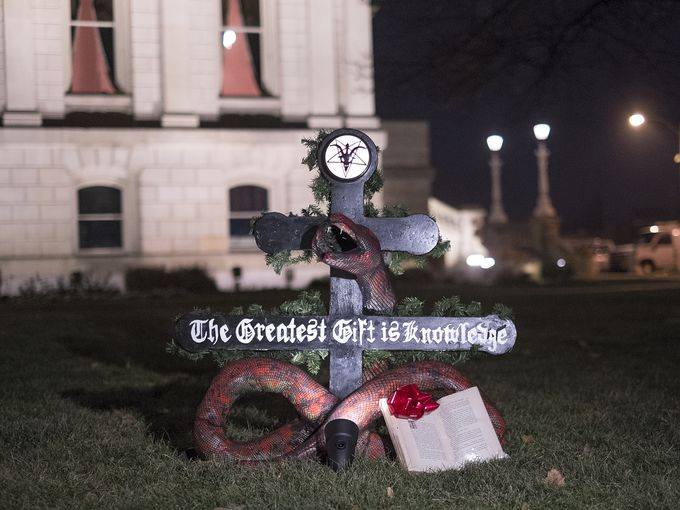 This year, the Snaketivity display may be coming back. If that happens, we’ll have Sen. Ted Cruz to thank for it:

In a news release, the group’s director, Jex Blackmore, said the group wanted to return after U.S. Sen. Ted Cruz’s presidential campaign announced plans for a live Nativity scene at the Capitol to run from 6 p.m. to 9 p.m. Dec. 12.

“The overriding message in our holiday display, and many of the Satanic Temple’s public activities, is one of plurality and religious liberty,” Blackmore said in a written statement. “We have no interest in proselytizing Satanism to the public. However, we refuse to allow one religious perspective (to) dominate the discourse.”

While the display hasn’t been approved yet, there’s no reason it should be denied provided all the paperwork is filled out properly, as it was last year.

By the way, the Satanic Temple will be featured on CNN’s This is Life with Lisa Ling tonight at 9:00p (ET). (Update: Due to today’s shooting in San Bernardino, this will be rescheduled)

(Image via Satanic Temple of Detroit)

December 2, 2015
Donald Trump: We Should "Take Out" Terrorists' Family Members
Next Post

December 2, 2015 Survey Shows 70% of Abortions in the United States Are Obtained by Christian Women
Browse Our Archives
What Are Your Thoughts?leave a comment