Survey Shows 70% of Abortions in the United States Are Obtained by Christian Women December 2, 2015 Tracey

According to a study released last week by LifeWay Research and Care Net, the majority of abortions performed in the U.S. are performed on Christian women, who are widely distrusting of their church when it comes to discussing their decisions. 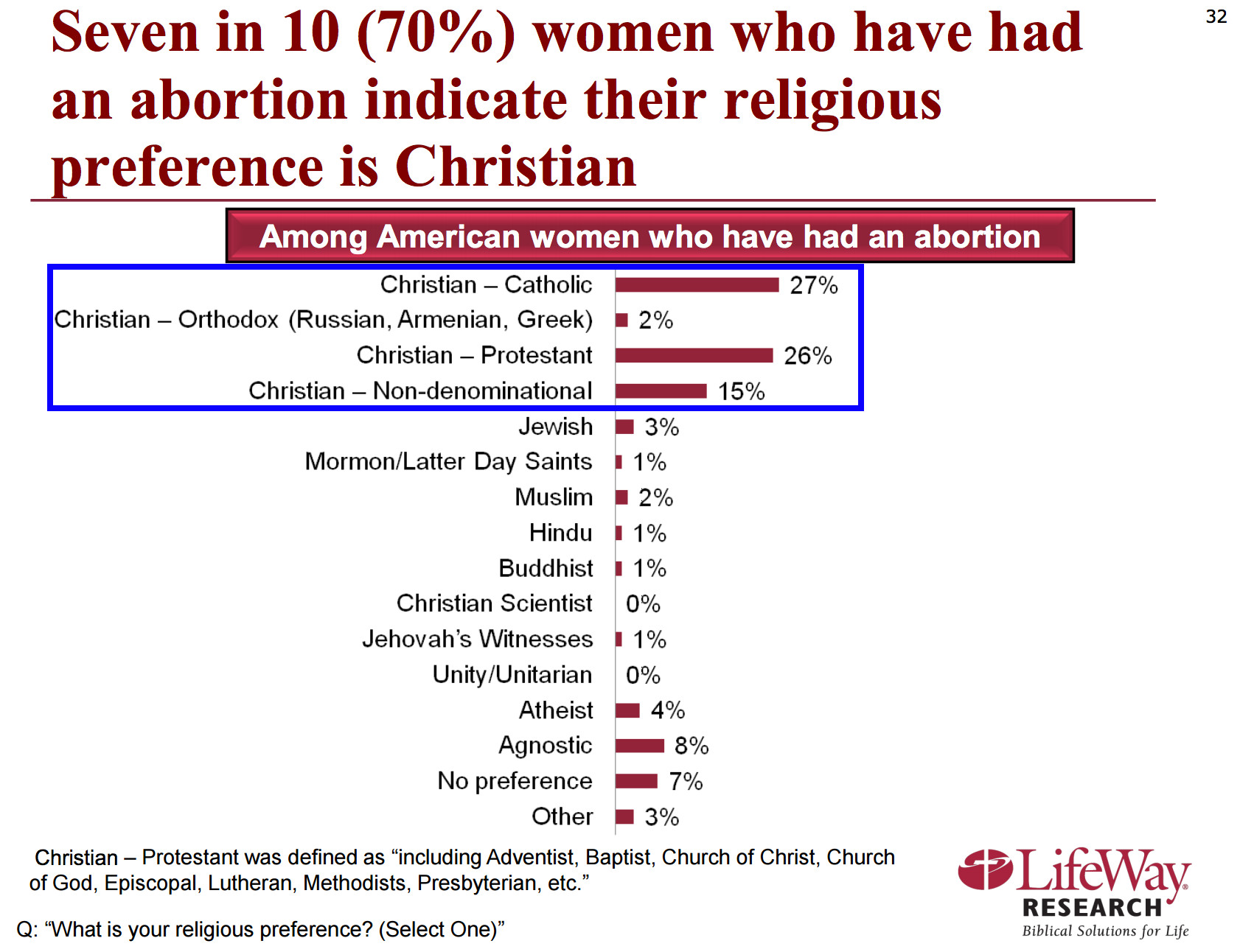 The study, which surveyed over 1,000 women across the country who had ever had a pregnancy terminated, is especially notable because it was conducted by LifeWay Research and Care Net — two organizations in the business of talking women out of abortions. Part of me thinks the survey was contrived to better target women at risk for obtaining abortions, so that they may change their minds. Surprisingly, though, those women are sitting in church pews, slipping out with discretion when it comes to their reproductive health.

Of the women surveyed: 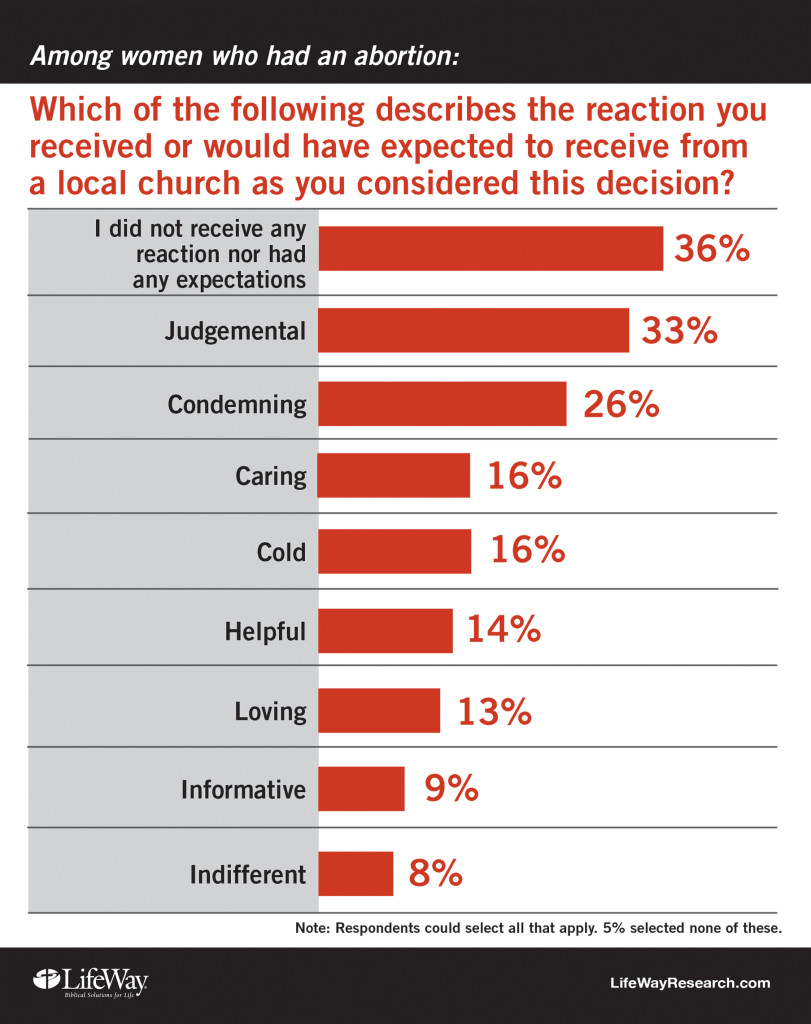 Scott McConnell, vice president of LifeWay Research is realistic about why Christian women keep silent on their decision.

But when a woman is willing to publicly acknowledge she’s had an abortion in the past, she will sometimes be approached by several other women in the church who’ve never been willing to share with anybody that they too have had an abortion. It’s incredibly freeing for them. 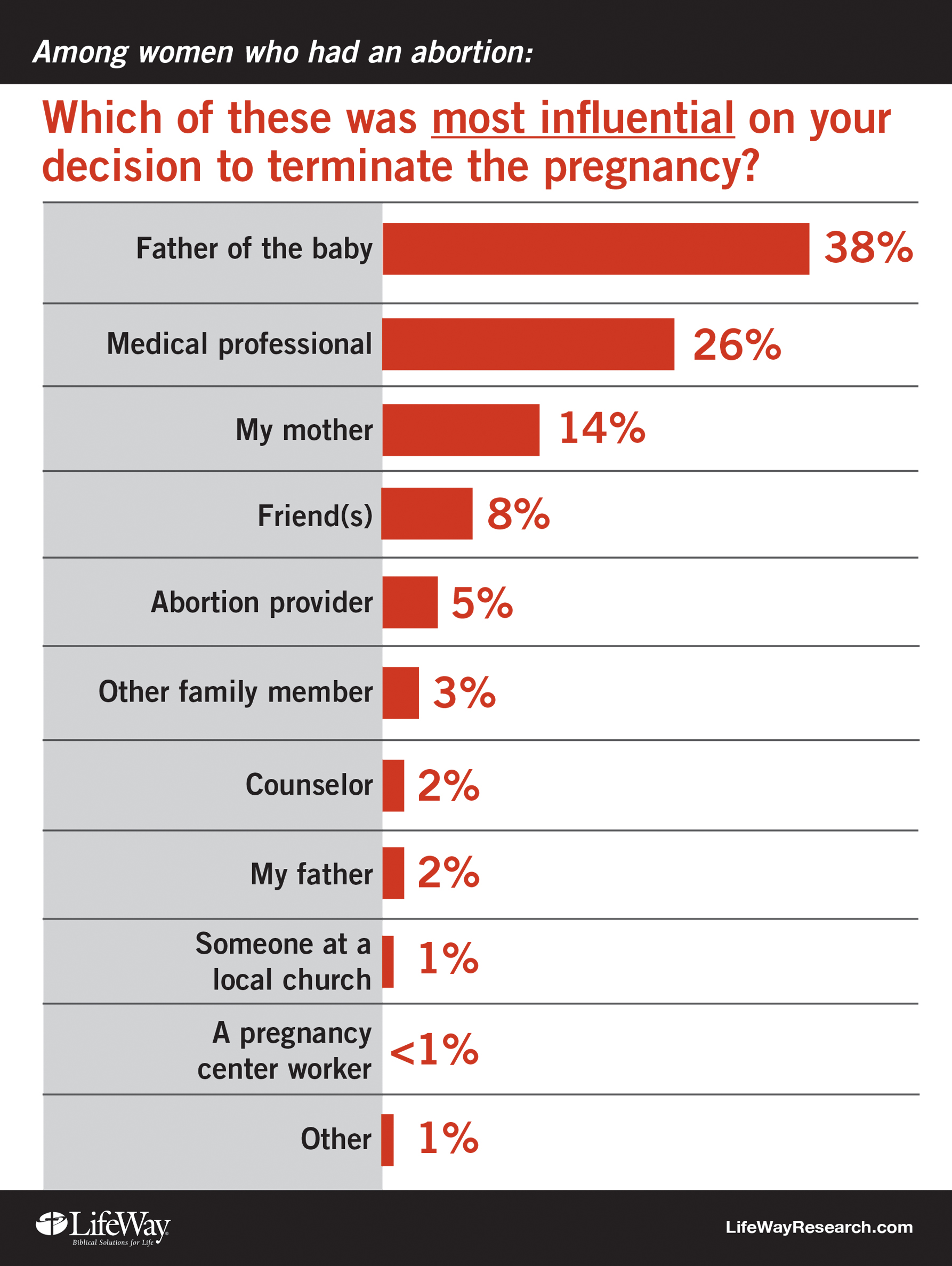 Fortunately those seeking an abortion are taking advice from the people who matter the most — those directly involved and medical professionals.

Sadly though, this research does not conclude with LifeWay and Care Net coming to terms with the church being almost irrelevant to a woman’s reproductive health.

“While much work needs to be done to equip the church to help women and men with their pregnancy decisions, there are positive signs that many churches will be receptive to efforts to implement programming that addresses this need,” said Roland C. Warren, president and CEO of Care Net.

If they really wanted to make a difference, they’d prioritize the health and happiness of their congregation by respecting autonomous decisions, instead of being hell-bent on bringing every unwanted fertilized egg into the world.

If this research tells us anything, it’s that women will seek abortions regardless of how guilty their churches want them to feel about it. It’s up to church leaders to evolve on the issue or risk alienating those who most need their unconditional emotional support.

And I’m just going to throw this out there: maybe toss some condoms in the collection plate before passing it around. It seems to be a little-known fact in the conservative circuit that the best way to prevent an abortion is to prevent pregnancy.

***Edit***: I should have made this more clear. As some commenters note, the 70% number is what you’d expect with the nation’s religious demographics, anyway. But that’s the point, isn’t it? If the people who attend Christian churches believed in what many of their pastors preached, you’d expect that percentage to be much lower. The conservative argument that Planned Parenthood — and having abortions in general — is just something liberals want is a complete lie. Christians use these services, too, and it’s disingenuous when they belong to churches working so hard to throw obstacles in the paths of those who need the help.

December 2, 2015
Thanks to Ted Cruz, a Satanic Snaketivity Display May Be Heading to the Michigan State Capitol
Next Post

December 2, 2015 Judge Says Indiana School District Can't Have Live Nativity Scene During Holiday Concert
Browse Our Archives
What Are Your Thoughts?leave a comment