Donald Trump: We Should “Take Out” Terrorists’ Family Members

Trump is going all in with his quest to secure his status as worst person in the world. On an interview with Fox News Channel this morning, the Republican presidential frontrunner not only underlined his idiocy but stooped to new lows, which he somehow keeps creating for himself: 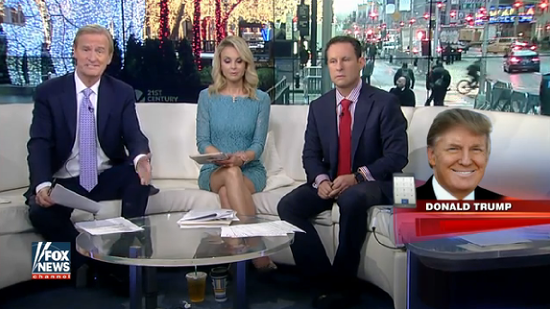 There’s so much wrong with this. The climate change comments — that President Obama should stop paying attention to it since it won’t kill us — are completely removed from reality; they’d be laughable if the issues weren’t so serious. The Iran comments — that they’ve already broken their end of the deal — are a work of fiction. His understanding of the situation in Syria sounds like something you’d expect from a drunk uncle who has no clue what’s going on but rants anyway.

But the worst part of it, hands down, is where he talks about the tactics he wants to use against ISIS:

I mean, one of the problems that we have and one of the reason we’re so ineffective, is they’re trying to, they’re using [civilians] as shields. It’s a horrible thing. They’re using them as shields. But we’re fighting a very politically correct war.

First off, that’s just disgusting. On every level. Without caveat.

Second, Trump’s out of his mind if he thinks this is somehow going to help win the battle against ISIS; it’s just going to supercharge their influence. They’ve been able to grow their ranks precisely because of U.S. attacks on civilians. What do you think happens when we’re not just accidentally killing kids, but taking out a three-year-old who has nothing to do with the conflict? What happens when we’re not apologizing for civilian casualties, but publicly crowing over the deaths of toddlers and grandmothers and celebrating the leveling of city blocks? Trump’s proposed strategy isn’t just gross; it’s horribly counterproductive.

Third, being (at least marginally) careful about attacks impacting civilian populations isn’t being “politically correct.” It’s called abiding by international law. Seriously, we’re talking about a presidential candidate whose military strategy is to knowingly and deliberately commit war crimes here. This is especially so when considering his familial targeting idea. While originally articulated under Article 4 of the 1949 Geneva Conventions, Article 51 of the 1997 Protocol 1 expansion explicitly affirms that direct attacks on civilians are strictly prohibited, stating:

1. The civilian population and individual civilians shall enjoy general protection against dangers arising from military operations. To give effect to this protection, the following rules, which are additional to other applicable rules of international law, shall be observed in all circumstances.

3. Civilians shall enjoy the protection afforded by this section, unless and for such time as they take a direct part in hostilities.

Trump would absolutely violate these tenets of international law with his proposed targeted attacks on civilians who are not direct participants in hostility, unless you consider sharing DNA to be direct participation… which no one else does.

He’s going to get backlash on this one, and I can already tell you what his (insufficient) retort will be, should he care enough to respond to incoming criticism: the human shield exception. Article 51 does say:

This isn’t a new excuse, of course; it’s the same loophole used to justify civilian casualties resulting from our drone operations and the plethora of unwarranted deaths caused by the U.S. during the wars in Afghanistan and Iraq. It’s probably going to be used to justify general civilian targeting in Syria given time. It’s a crappy loophole with far too much breadth, but even with the scope of its applications, Trump’s plan doesn’t meet the burden set forth. Why? Because he doesn’t care whether the family members are acting as human shields; that’s not his argument for the attacks. His justification has nothing to do with military targets and everything to do with hitting suspected terrorists emotionally.

That, by the way, is also directly prohibited under Article 51:

6. Attacks against the civilian population or civilians by way of reprisals are prohibited.

Taking out civilian relatives of enemy combatants with no military involvement in search of revenge? That’s a definitive violation of this passage.

Finally, this policy is yet another reminder of how bigoted Trump is, because when he’s getting behind the idea of committing war crimes in order to fight the scourge of terrorism, there’s a racial aspect to it as well. Could you imagine him advocating that we take out Robert Lewis Dear‘s son as retribution for attacking the Planned Parenthood in Colorado? Could you ever see him ordering Dylan Roof‘s mother be executed because she gave birth to him? Those two are also terrorists, but Trump would never in a million years ask for drone strikes against their families. That’s because this policy is absurd, of course, but also because their skin isn’t dark enough for Trump to feel good about dehumanizing them.

In other words, Trump is still disgusting, his superficial understanding of geopolitics and military strategy is going to cause more trouble with ISIS, his quest for payback would qualify as a war crime, and his racism is shining bright as ever.

Not that he really cares about that, but here’s hoping enough of the American electorate does when the time comes to make a choice at the voting booth.

December 2, 2015 Thanks to Ted Cruz, a Satanic Snaketivity Display May Be Heading to the Michigan State Capitol
Browse Our Archives
What Are Your Thoughts?leave a comment