Following last Friday’s deadly shooting at a Colorado Planned Parenthood by a pro-life Christian worried about “baby parts,” conservatives have been desperate to shift focus away from their dangerous anti-abortion rhetoric, and how it might help create these terrorists. Desperate enough to suggest the shooting was the work of a transgender liberal killer. Desperate enough to suggest that being called on lying about organ harvesting from live babies is just “demonizing the messenger”.

One of the more grotesque efforts, however, comes compliments of Colorado State Representative JoAnn Windholz, who took to Facebook to explain how such violence really is, ultimately, Planned Parenthood’s fault. 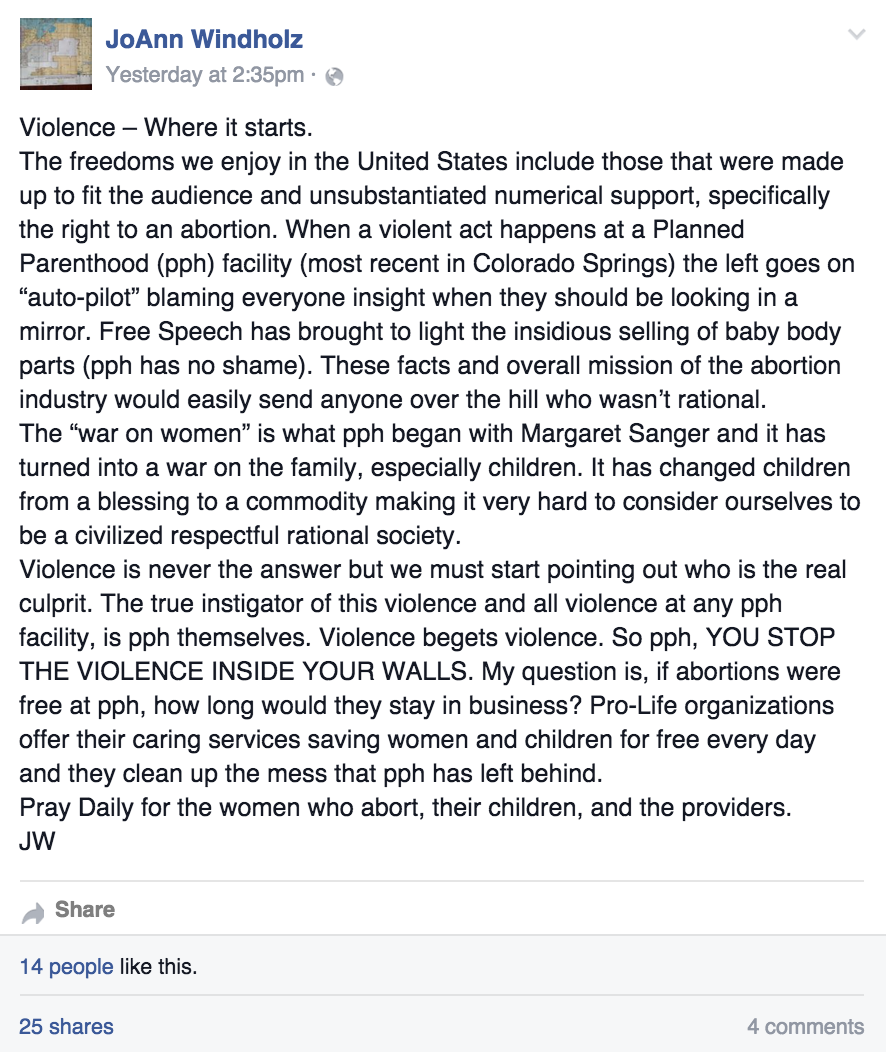 The post is replete with lies the Right loves to perpetuate about the selling of “baby body parts,” along with a hefty, hefty dose of victim blaming.

Violence — Where it starts.

The freedoms we enjoy in the United States include those that were made up to fit the audience and unsubstantiated numerical support, specifically the right to an abortion. When a violent act happens at a Planned Parenthood (pph) facility (most recent in Colorado Springs) the left goes on “auto-pilot” blaming everyone insight when they should be looking in a mirror. Free Speech has brought to light the insidious selling of baby body parts (pph has no shame). These facts and overall mission of the abortion industry would easily send anyone over the hill who wasn’t rational.

The “war on women” is what pph began with Margaret Sanger and it has turned into a war on the family, especially children. It has changed children from a blessing to a commodity making it very hard to consider ourselves to be a civilized respectful rational society.

Violence is never the answer but we must start pointing out who is the real culprit. The true instigator of this violence and all violence at any pph facility, is pph themselves. Violence begets violence. So pph, YOU STOP THE VIOLENCE INSIDE YOUR WALLS. My question is, if abortions were free at pph, how long would they stay in business? Pro-Life organizations offer their caring services saving women and children for free every day and they clean up the mess that pph has left behind.

Pray Daily for the women who abort, their children, and the providers.

Windholz rationalizes her victim blaming with the same falsehood that the shooter uttered — the selling of baby parts. Despite the tepid denunciation of violence — a mere passing thought among paragraphs of “they brought it on themselves” — Windholz’s real focus is on the victims of violence, and how they were more or less asking for it.

But don’t worry. After she’s done explaining how the killer isn’t the “real culprit,” she leaves off with a call to prayer. Because nothing says Christian love like explaining at length why someone brings murder upon themselves, like following up with an “I’ll pray for you.”