Senator Orrin Hatch: The Wall of Separation Between Church and State Must Come Down November 30, 2015 Hemant Mehta

Senator Orrin Hatch: The Wall of Separation Between Church and State Must Come Down

In an essay for the Washington Times, Senator Orrin Hatch (R-UT) explains why the separation of church and state needs to end: 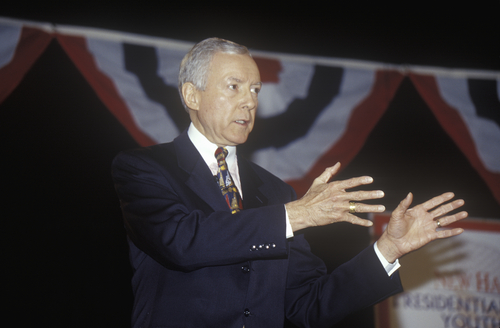 Simply put, the idea of a rigid separation between church and state is without any basis in our history or laws.

The conventional wisdom peddled by advocates for stringent exclusion of religion from the public sphere is that aggressive enforcement of their vision of the establishment clause enhances religious freedom. Unfortunately, nothing could be further from the truth. The erroneous wall-of-separation doctrine narrows the role of religion in public discourse, fueling the view that religion is a private matter rather than a fundamental precept of American civil society and leading many to fall prey to the disturbing claim that religious freedom doesn’t extend much further than the church door.

You would think a Mormon politician would understand the importance of the wall better than most.

Hatch argues that, under our current interpretation of the law, religious groups are put at a disadvantage, denied the “same opportunities afforded to secular counterparts.” Anyone who looks at the numbers knows that’s not the case at all. Religious groups get incredible tax breaks, pastors get generous housing allowances, and church leaders have the ability to preach whatever their hearts desire. To get federal funding, however, the rule is that the group cannot proselytize with the money. It’s not much to ask for — and yet Hatch still thinks the rules are too strict.

Even if church/state separation wasn’t a founding principle of this nation, we would have had to adopt it anyway. With such a plurality of worldviews, it makes no sense to let the government choose one to promote, and religion has thrived as a result of that. In countries where there is a national religion, attendance is on the decline and most citizens don’t take it very seriously. We’re unique in our religiosity.

I would love to see Hatch’s reaction if Christianity weren’t in the majority. If the government promoted atheism or Islam instead of a religion close to his, I suspect he’d be saying something very different.

(Image via Joseph Sohm / Shutterstock.com. Thanks to Brian for the link)

November 30, 2015
An Interesting Display of Unintended Irony
Next Post

November 30, 2015 Jeff Sparrow Misses the Point: Atheism Doesn't Need Saving
Browse Our Archives
What Are Your Thoughts?leave a comment