Guess What My 13-Year-Old Just Learned About Islam In Her Public School November 30, 2015 Terry Firma

Michael Epperson‘s sensible piece on Friendly Atheist, about whether we should refer to Islam as a “religion of peace,” ends with an editorial note: “The opinions expressed here are those of the author.”

Well, for the record, they mirror mine almost exactly. This part was especially good, I thought:

We can’t afford pet names and word games. I understand that [Hillary] Clinton would play the “religion of peace” game even if she viewed Islam as horrific, but this carelessness shut downs the conversation. We need sophisticated conversations about a complicated religion. If your contribution to that conversation is limited to five letters, you’re not doing Muslims, the vast majority of whom are peaceful and tolerant, any favors.

It seems that many people think that they are doing Muslims a favor. But those good intentions foster bad thinking. Some people praise Islam for being a religion of peace and, without coming up for air, condemn critics of Islam for generalizing the faith. The irony is lost on these people. 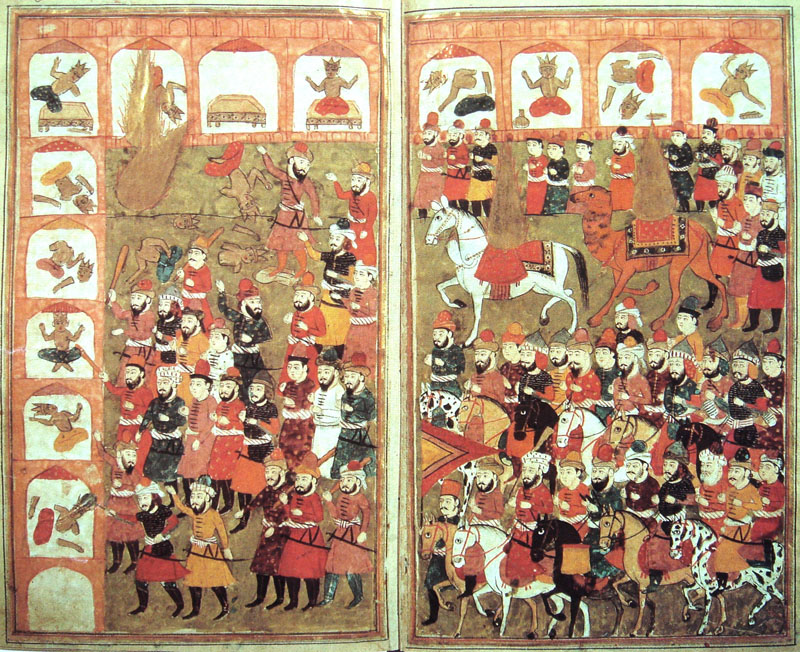 Unfortunately, Epperson’s opinion, and mine, won’t really matter. At the highest level of government, and throughout most of academe, we’ll all be bombarded for years to come with the mantra that Islam equals peace.

Consider this: My oldest daughter, who is a very mature 13 and interested in becoming a judge or a diplomat, this year learned the following about Islam and its prophet in her blue-ribbon school:

So nice. He sounds just like hippie Jesus. Or maybe Bernie Sanders.

“Anything else?” I asked her. She shook her head. I pressed a little bit. Had she also learned anything about Muhammad’s campaigns of aggression and violence? Of the 100-plus verses in the Qur’an, the ostensible word of Allah that Muhammad followed, that specifically call for non-Muslims to be mutilated or killed?

Had she heard about the child bride who he loved so much that he raped her when she was 9 or 11 or 12 (depending on the source)? About how the pious prophet condoned sex with slaves and the wives of conquered men?

How about the conversions to Islam that Muhammad and his posse forced through violence?

The answer was no: “But daddy, Muhammad was a trader, not a warrior, right?”

So when you hear about children learning about religion in public schools, as opposed to being force-fed religious instruction in private ones, don’t think for a minute that the public-school kids will assuredly be offered an honest picture. For every Christian school that teaches kids about Islam in possibly prejudicial ways, there may be a public school (if not several) going in the other direction, proclaiming exactly the white-washed, lovey-dovey bilge that Epperson decries in his writing.

I consider it likely that the schools apply the same pretty veneer to other world religions; if true; that’s just as objectionable. Half the truth isn’t good enough.

I’m reminded of the Islamic scholar Ibn Warraq, the author of 10 books on Islam, paraphrased here in New Humanist:

We are forever being told by apologists for Islam that it is essentially a religion of peace and love, like all religions, and that anyone using violence in its name are not true or ‘real’ Muslims. That this apologia will not wash is made plain by Ibn Warraq in his discussion of the Muslim exegetical technique of naskh, or ‘abrogation’, whereby, according to the traditional chronology of events, early texts or revelations are over-ruled by later ones. By laying them out in detail Ibn Warraq shows that the majority of texts recommending clemency and tolerance are abrogated by later ones advocating violent action. It seems that ‘terrorists’ have as much right to consider themselves ‘good Muslims’ as any others.

I don’t think that’s a truth that will make it into the curriculum in my lifetime.

(Image: Muhammad and his warriors destroying idols in Mecca, collection National Library of France, via Wikimedia)

November 30, 2015
Fernando Alcántar, a Former Christian, Explains Why Breaking Up with Faith Hasn't Left Him Bitter
Next Post