***Update***: This clip was from a video Feuerstein posted on July 29 about Cecil the Lion. He lamented how we all were sad about the lion’s murder but not about all the “babies” who are “killed” at Planned Parenthood. It doesn’t change the horrific nature of what he said. Just wanted to give that context.

It was only a matter of time before a video like this came to light.

Joshua Feuerstein, who gained notoriety this month for complaining about Starbucks’ red cups, apparently once encouraged his followers to go after doctors who provide abortion services.

To be clear, this video was made long before this weekend. It appears to have been posted about two weeks after the first anti-Planned Parenthood video came out this summer. Still, what Feuerstein says is appalling and it’s nowhere to be found on his own social media accounts as far as I can tell. (It wouldn’t be the first time he’s deleted a video that spurred backlash from even his own followers.) 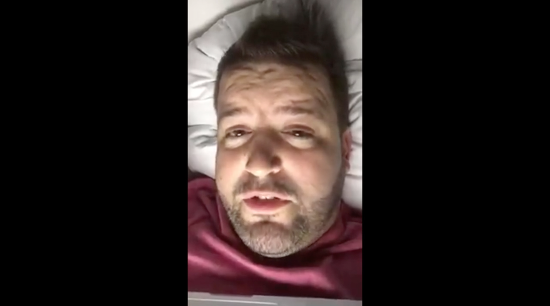 Planned Parenthood has hunted down millions and millions of little innocent babies, stuck a knife into the uterus, cut them, pulled them out, crushed their skull with forceps, ripped their body apart, sold their tissue, and threw them bleeding into a trash bin.

I say, tonight, we punish Planned Parenthood. I think it’s time that abortion doctors should have to run and hide and be afraid for their life.

He didn’t get more specific than that in the clip, but the message is loud and clear.

Making this even more frightening is the fact that Feuerstein has posted videos before in which he brandishes a gun and urges his followers to make sure they know how to use their own. This sort of extremist rhetoric is nothing new to people who have watched him for a long time.

It’s irrelevant when this video was created. You still have a conservative Christian sending a message to his mob that they should punish doctors providing an important — and legal — service for women to the point where they’re running for their lives.

After this weekend, they have enough to worry about. They shouldn’t have to fear for their safety because a supposed “pro-lifer” told his army to go after them.

***Update***: Feuerstein has responded to the video here:

My thoughts on the PLANNED PARENTHOOD shooting … and abortion!!!!

(Thanks to TJ for the link)

November 29, 2015 Friendly Atheist Podcast Episode 83: Ask Me Anything
Browse Our Archives
What Are Your Thoughts?leave a comment