I posted about this earlier this month, but it’s still appalling that Pastor Kevin Swanson said that homosexuals should be put to death, as it says in the Bible, only to add that he didn’t want people to take action on that immediately because gay people needed “time to repent.”

Maybe your initial reaction is: Who cares? That guy is on the fringes of Christianity. He doesn’t represent most Christians.

And yet Swanson is popular enough that three Republican Presidential candidates saw it fitting to attend that very conference — knowing what Swanson had said about gay people. They cared so much about getting a few more votes that they were willing to overlook his murder fantasies. This man is not on the fringes of Christianity. He represents a sizable voting bloc — one large enough that Presidential candidates are clamoring for their votes.

At least Rachel Maddow was willing to talk about the issue on her show: 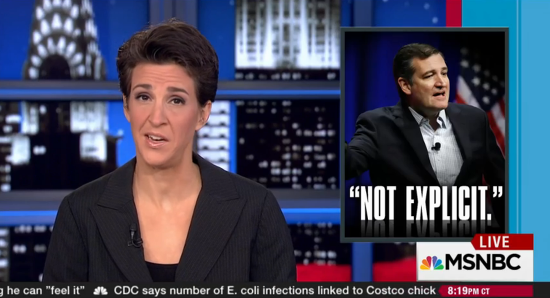 Her point — which is absolutely a fair one — is that Mike Huckabee, Bobby Jindal, and Ted Cruz attended that conference and none of them saw it fit to address Swanson’s “kill the gays” call for the execution of gay people.

Cruz, who actually has a fighting chance of getting the Republican nomination, still doesn’t care. His National Spokesperson Rick Tyler told Maddow’s producers that the call for death was “not explicit,” even though, as you see in that video, it absolutely is. How much more explicit did it need to be before Cruz saw fit to walk away? Is it okay, in Cruz’s view, to merely imply that some people deserve to be executed for their sexual orientation?

The caveat of giving gay people the chance to find Jesus and renounce their homosexuality doesn’t make it any better. (After all, what would Swanson do to gay people who are not Christian and understand that their sexual orientation isn’t going to change?)

Keep in mind what Maddow and others are asking for: They’re not saying Cruz has to like gay people or even tolerate them. They’re simply asking why he thought it was okay to speak at a conference hosted by a man who thinks gay people deserve the death penalty.

Cruz can’t feign ignorance here. This wasn’t a surprise. He went there with the understanding of Swanson’s views.

So how come no other reporters seem to be asking him about this?

As a commenter at Joe. My. God. points out, when then-Senator Obama was running for President in 2008, he received the full wrath of the right wing media for attending a church headed up by Pastor Jeremiah Wright. Wright never even came close to saying anything as awful as Swanson is saying now.

And yet the media — along with conservative Christian groups everywhere — just seem content to let this one slide.

One last note: None of this would likely have come to light if it weren’t for the staff at Right Wing Watch, who monitor these issues like hawks. If you haven’t already, please make a contribution to keep their work going. 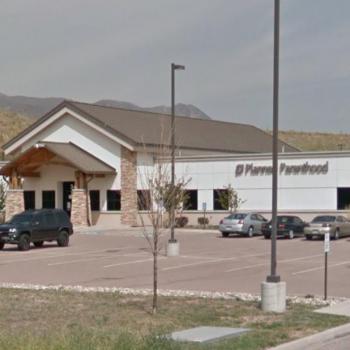 November 27, 2015 A Conversation Between Two Atheist Debaters
Browse Our Archives
What Are Your Thoughts?leave a comment