Harrison Mumia, President of Atheists in Kenya, wasn’t surprised by all the attention Pope Francis received yesterday when he visited the country. But he couldn’t believe that his government, one that also has the separation of church and state built into its Constitution, declared it a “public holiday.” That was a step too far, he writes at CNN, causing him to file a lawsuit in court to have the holiday nullified: 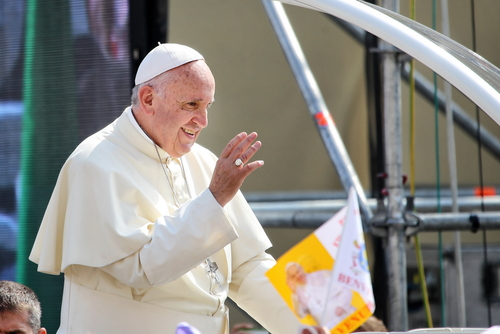 Article 8 of the Kenyan Constitution guarantees the separation of church and state. It states that there shall be not state religion. The fact that Christians constitute a majority of Kenyans does not entitle them to impose their beliefs and practices on the rest of the nation.

The declaration of a public holiday by the Kenyan Government on the basis of the Pope’s visit to Kenya grossly violated the principle of separation of church and state under article 8.

I have a lot of respect for Pope Francis, yet I believe it is the duty of every Kenyan to protect and defend the constitution. We must honor the provisions of the constitution to keep religion out of the public arena.

Mumia’s lawsuit has already received plenty of backlash, including an editorial denouncing his actions as “disrespectful”:

The group Atheists in Kenya has filed a case in the High Court to have the national holiday declared in honour of Pope Francis’ visit to Kenya nullified.

This is ludicrous, disrespectful, narrow-minded and clearly a publicity stunt.

The [atheist] group is free to NOT stay home from work and NOT reflect and pray.

That is the essence of freedom of worship and freedom of association as enshrined in the constitution.

Atheism.org says, “Atheism is not a disbelief in gods or a denial of gods; it is a lack of belief in gods. Older dictionaries define atheism as ‘a belief that there is no God’.”

Atheists in Kenya have come up with a third definition — to despise believers in a state that is secular for all intents and purposes.

That stance relegates them to the fringe.

They have disrespected Pope Francis and millions of Kenyans.

This is the sort of nasty pushback Mumia has to deal with. Saying that the Pope’s visit is no cause for a government-sanctioned holiday isn’t a publicity stunt. It’s a valid defense of the nation’s own laws. Just because Christians are in the majority is no reason to look away from the Constitution when it suits their needs. Challenging religious privilege is something every Kenyan should be doing.

Keep in mind that Mumia is not asking anyone to ignore or protest the Pope. He’s not trying to recruit atheists or create some sort of atheist holiday. He’s simply saying the government shouldn’t be in the business of honoring the head of the Catholic Church in a way they would never grant other religious or non-religious leaders.

What’s upsetting is that Mumia appears to be alone in calling attention to this issue.

(Image via MikeDotta / Shutterstock.com. Thanks to Sean for the link)