The Hanover County Board of Supervisors in Virginia, led by chairman Wayne Hazzard, made a special plea to the community at this week’s meeting. After a short speech by Hazzard about the importance of giving thanks to God, the Supervisors passed a resolution to “urge and encourage the citizens of the Hanover County, Virginia to include prayer in their Thanksgiving celebration.”

Because the people who want small government don’t mind when that government is telling you how to pray to the Christian God. 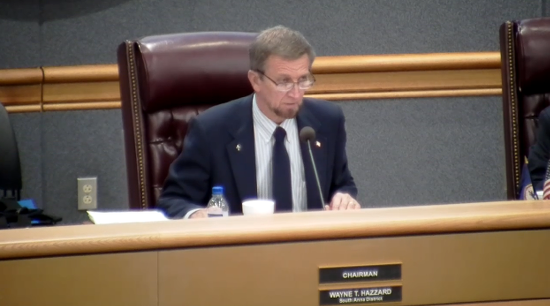 Hazzard, who once described himself as a “Christian conservative tea-party Republican,” had something bigger in mind than the usual early-meeting prayer.

“As we celebrate Thanksgiving this week, I think it appropriate that we continue to remember the reason that this great nation was formed and by whose grace it continues to survive,” he said, reading from prepared remarks. “Christians who formed our nation celebrated days of thanksgiving to God. The Jamestown and Plymouth colonists recognized that they were sustained only by God’s providence and celebrated Thanksgiving feasts.”

“And these days of an enemy from outside of this country as well as people from within who would attempt to remove all recognition of God from public life, we offer this proclamation as a reminder that the United States has always acknowledged our nation … is dependent on God’s grace and providence.”

Did you catch that last part? Hazzard referred to ISIS in the same condemning breath as the atheists in America who believe the government should remain neutral on religious matters. He fails to see the irony of denouncing the faith-based terrorists by adopting a resolution telling everyone to believe in his God.

Michael Paul Williams, writing for the Richmond Times-Dispatch, called Hazzard out on his unnecessary and unwise resolution:

I’m thankful that we live in a nation where people have freedom of religion, or freedom from religion. In that regard, the board’s resolution seems the antithesis of conservatism or libertarianism. What’s more nanny state than telling people when they should pray?

What comes next? Does the board “urge and encourage” the citizens of Hanover to tithe in lieu of paying taxes? Will it advocate the establishment of an official religion for the county?

Perhaps what we need here is more practicing and less preaching. In Virginia, where the majority party refuses to extend Medicaid coverage to the poor and would deny entry to desperate refugees fleeing war-torn Syria, expressions of religious piety from elected officials ring hollow. Government everywhere should have more pressing business than telling us to hit our knees, not unlike a parent hovering over a child at bedtime.

I love that last paragraph. How dare they invoke Christianity when telling everyone to pray while ignoring it when it comes to helping the less fortunate?

You can let the Supervisors know how you feel; their email addresses are right here. (Keep it appropriate.)

(Thanks to Craig for the link)