Stockton (CA) Mayor Holds Meetings in Church to Save Money, but Atheists Found a Free Alternative

Several days ago, I posted about how the city of Stockton, California held a prayer rally after a local tragedy. Mayor Anthony Silva promoted that rally on the city’s website and Facebook page, and also city resources to host the event. Finally, he gave God a “key to the city“: 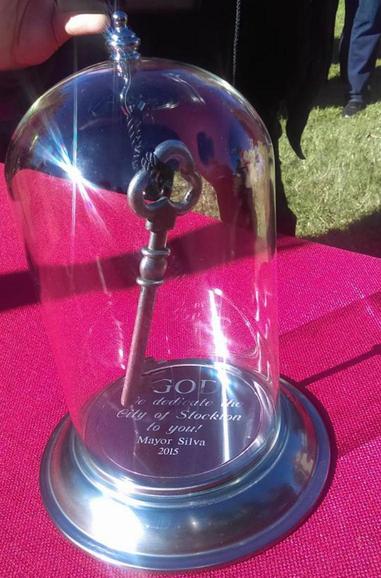 This wasn’t the first time Silva had promoted religion while on the job. He also “organized Town Hall meetings, co-sponsored by Christian organizations, at Calvary First Assembly of God and at Christian Life Center.” And he told reporters that the locations wouldn’t change:

“You know, if I would have scheduled it at a high school, someone who likes charter schools over public schools might have said they don’t feel welcome there because I don’t believe in public schools … so I’m not [going] to his town hall meeting at the high school. We can’t please everyone.“

As I said before, that’s a false equivalence. This wasn’t about personal preference or what made some atheist citizens uncomfortable. This was about promoting Christianity through the government, which is illegal, and which Silva had a habit of doing.

When an atheist group told him he needed to change venues, Silva argued he was just looking out for the city’s finances:

“Residents should know if I used a city facility like the arena or Bob Hope Theatre, I would need to pay thousands of dollars in fees,” Silva said.

Well, lucky for him, the Stockton Area Atheists and Freethinkers (SAAF) have done the research and found rental spots that are far cheaper than that.

Not just cheaper. One of them is free.

So Silva isn’t just promoting Christianity while on duty.

He’s a Christian who lies to the public. Just like Jesus taught him to do, I guess.

Spending no more than ten minutes on the phone, [SAAF organizer David] Diskin found four venues that the City could affordably use.

University of the Pacific offered Faye Spanos Center (capacity 872), which has been used for a similar Town Hall when Jerry McNerney needed space. The venue would cost the City less than $200, only to cover employee expenses, pending the President’s approval.

But the real surprise came when a representative from the Civic Auditorium returned Diskin’s call. The venue, which seats 3,000, is owned by the City and available for official City use at no cost. Somehow, the Mayor overlooked a venue that tax payers had already paid for and would be perfect for such an event.

All three venues are currently available the evening of November 30th and have offered to host the event.

If the mayor doesn’t want to use the free option, SAAF says they will pay for either of the alternative venues.

Silva is out of excuses.

And if he doesn’t fix the mess he caused, the city will lose a lawsuit that will cost the taxpayers far more money than he’s fake-saving by hosting meetings in church.