Satanists Thank Christian Legal Group for Paving the Way for Their Own Success November 24, 2015 Hemant Mehta

If you think about what the Satanic Temple has accomplished recently, it’s impressive for any group, much less one you didn’t even know existed before 2013.

They pressured Oklahoma to reconsider a Ten Commandments monument at its State Capitol building because they wanted a statue of Baphomet in the same space. (The Christian monument was eventually deemed illegal, anyway.) They got a Florida school district to ban Bible distributions because they wanted to give away Satanic-themed coloring books. They got a Satanic display in the Florida State Capitol building to join the Nativity scene last winter. And, perhaps most significantly, they sued the Governor of Missouri on behalf of a member who didn’t want to wait for the 72-hour mandatory waiting period to pass before she could obtain an abortion. She used the argument that waiting so long violated her “religious freedom.” 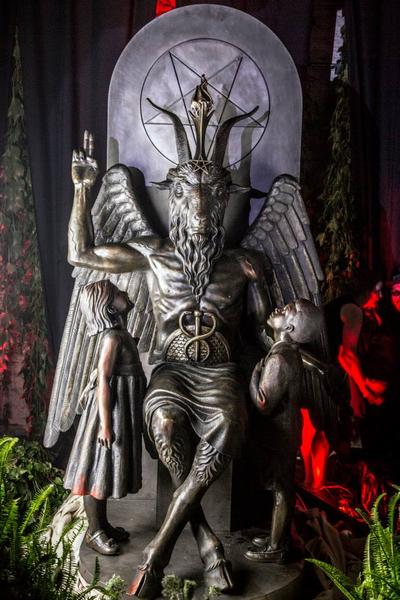 It’s easy to forget that the Satanic Temple doesn’t actually believe in anything supernatural, including Satan. Yet they’ve forced government officials to recognize that if they want to grant privileges to the Christian majority by saying the door is open to all religions, they may have to treat Satanists the same way. It’s an argument that doesn’t always work with atheist groups who explicitly reject God.

Valerie Tarico, writing at Salon, spoke with the group’s leader Lucien Greaves about their activism, and he makes some excellent points:

My favorite part of the interview has to be the shout-out to Liberty Counsel, the Christian group that defended anti-gay Kentucky clerk Kim Davis, for inadvertently showing them the tricks of the trade:

“We came into this with no resources, no funding. We’ve gotten this far on the dime of the Liberty Counsel that have opened the doors so wide that they can’t prevent us from walking in now… Ironically if they would keep their stuff out of the public sphere that would be to their advantage, because we don’t have the real estate they have. When they open up a public forum, they do so to our advantage — to the advantage of minority religions. Who would have heard of us if it weren’t for idiots at the Liberty Counsel? We should send those assholes a thank you.”

It’s not the first time a Christian group has played the “religious freedom” card, only to have it backfire down the road. The only reason Secular Student Alliance and Gay/Straight Alliance groups are allowed in public high schools is because Christians fought in court to allow Bible clubs to meet. They got their wish, but it was the same ruling that allowed opposition groups to gather and thrive.

Remember that the next time you hear Christians fighting for special rights. Every time they use their faith as an excuse to push their beliefs where they don’t belong, the courts could theoretically rule the same way with Satanists. And Lucien’s Law strikes again.

(Image via Matt Anderson. Thanks to Insightfill for the link)