Mike Grant, who wants to spread the Gospel through his “Philly Jesus Ministry” (in which he dresses up like Jesus and walks the streets of Philadelphia), has launched a GoFundMe campaign to raise the money he needs.

He’s only asking for $70 million. So I’m sure he’ll have no problem at all. 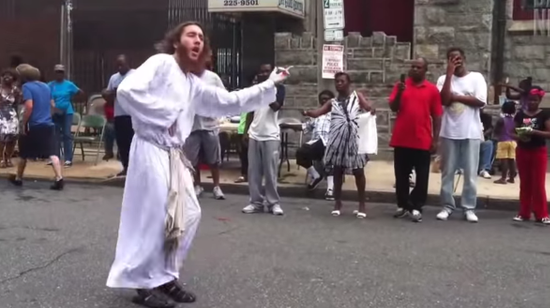 What will the money be used for?

– expenses for food..travel..etc for our creative group that will be the PhillyJesusMinistry team.

–a helicopter/jet for the PhillyJesusMinistry to transport the ministry from and to future speaking engagements across the WORLD to share my testimony how JESUS saved me from the dark hole of addiction and despair..AND TO SPREAD THE GOSPEL OF JESUS CHRiST TO EVERY CREATURE iN EXiSTENCE

In the two weeks since the campaign began, he’s almost up to $100. Which won’t buy him a stadium, but could probably pay for a couple of remedial writing and grammar classes.

Maybe it’s a sign from God to go back to his day job.

That said, I think he’s lowballing it. When Pastor Creflo Dollar asked his congregation for a jet, he said he needed $65 million. When you throw in a stadium and Taco Bell, Grant should have upped his fundraising amount to a few hundred million more.

(Image via YouTube. Thanks to Zack for the link)

November 24, 2015 A Fourth Compilation of Richard Dawkins' Best Arguments and Comebacks
Browse Our Archives
What Are Your Thoughts?leave a comment