Here’s What Happened When a Christian Parent Pulled Her Kids From a Gay Teacher’s Theater Class November 23, 2015 Camille Beredjick

“I find that theatre without gays is like cooking without spices.”

That’s only one brilliant line from a text that Michael Neri, a theater teacher from Birmingham, England, sent back to a homophobic parent who told him that she would be pulling her kids from his class because he’s gay. She told him that her family’s beliefs didn’t agree with his “lifestyle,” and he gave her all the reasons why that’s a ridiculous thing to say.

Neri tweeted their exchange, and it caught fire online. Here’s the full text of their conversation: 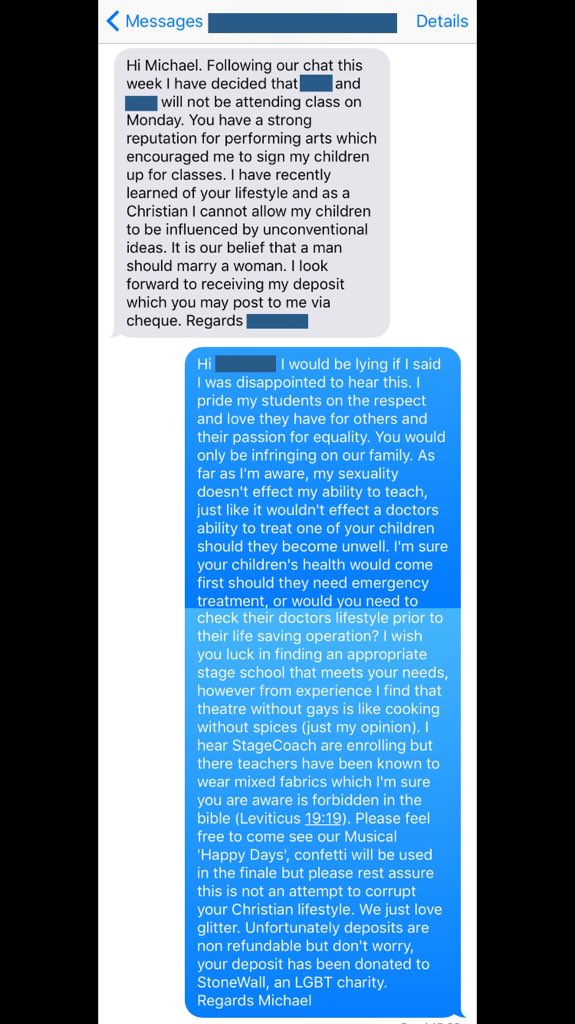 Hi Michael. Following our chat this week I have decided that _____ and _____ will not be attending class on Monday. You have a strong reputation for performing arts which encouraged me to sign my children up for classes. I have recently learned of your lifestyle and as a Christian I cannot allow my children to be influenced by unconventional ideas. It is our belief that a man should marry a woman. I look forward to receiving our deposit which you can post to me via cheque. Regards _____

Hi _____ I would be lying if I said I was disappointed to hear this. I pride my students on the respect and love they have for others and their passion for equality. You would only be infringing on our family. As far as I’m aware, my sexuality doesn’t effect my ability to teach, just like it wouldn’t effect a doctor’s ability to treat one of your children should they become unwell. I’m sure your children’s health would come first should they need emergency treatment, or would you need to check their doctor’s lifestyle prior to their lifesaving operation? I wish you luck in finding an appropriate stage school that meets your needs, however from experience I find that theatre without gays is like cooking without spices (just my opinion). I hear StageCoach are enrolling but their teachers have been known to wear mixed fabrics which I’m sure you are aware is forbidden in the Bible (Leviticus 19:19). Please feel free to come see our musical ‘Happy Days,’ confetti will be used in the finale but please rest assured this is not an attempt to corrupt your Christian lifestyle. We just love glitter. Unfortunately deposits are nonrefundable but don’t worry, your deposit has been donated to Stonewall, an LGBT charity. Regards, Michael.

Neri told Mic that it’s one thing to be judged for his teaching abilities, but another to be discounted for being who he is.

“As a child, if I’d had something like [drama school Talking Props], I would’ve flourished more than I ever could’ve hoped for,” he said. “It’s a safe haven for people to be able to come, be creative and be around people in a supportive environment.”

“When it comes down to my professionalism and my ability as a teacher, [religion] shouldn’t be an issue,” he said. “Either you believe in my ability to teach and you send your children or you don’t.”

Ultimately, he says, the text he received was a good thing. Since his tweet of the exchange went viral, he’s had an outpouring of responses from other teachers who have gone through similar experiences.

“I’ve had messages from teachers in similar situations and it’s been humbling to have that,” Neri said. Neri tried to contact the mom who sent the text when he realized it was going viral, but she has not answered his calls.

“I take a positive from all this, not a negative,” he said. “I’m taking the love and everything that’s coming from it, not the initial text I got from the lady.”

This poor homophobic woman accidentally united thousands of LGBT-supportive people with one text. Everybody wins.

November 23, 2015
This is Conservative Christian Logic in a Nutshell
Next Post

November 23, 2015 At Florida High School, Football Coach's Main Goal is to Convert Students to Christianity
Browse Our Archives
What Are Your Thoughts?leave a comment