Chemotherapy Shrank a Baby’s Brain Tumor, but Pope Francis is Getting All the Credit November 23, 2015 Hemant Mehta

Chemotherapy Shrank a Baby’s Brain Tumor, but Pope Francis is Getting All the Credit

Just weeks after Gianna Masciantonio was born, doctors discovered she had an inoperable brain tumor. It must have been devastating for her parents, Joe and Kristen, but they did what any parents would have done: They put her in the Children’s Hospital of Philadelphia and let doctors do anything in their power to save her. And there’s finally some good news! 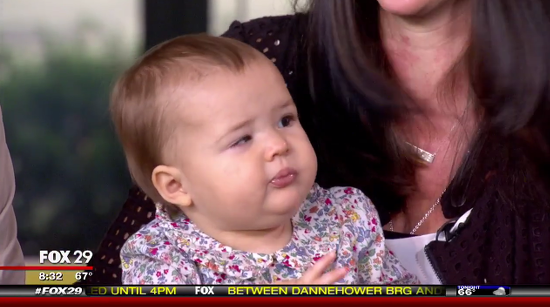 … last week, Joe said, scans showed that a troublesome tumor in 1-year-old Gianna’s brain shrank significantly after rounds and rounds of surgeries and chemotherapy, to the point where it’s “basically gone.”

Joe and Kristen are obviously thrilled, and that’s why they’re giving credit where it’s due: They’re attributing her recovery to Pope Francis, who kissed their daughter’s head when he was in town.

Joey explained that they walked to the federal building where they got a sneak peek of the Popemobile before the pope’s took his ride around the city.

But at that point they still didn’t know they were going to see the Pope.

“We just thought we’d see him drive by. We never thought in a million years that he would bless our daughter,” Joey said.

A member of the Swiss Guard picked little Gianna up so that the Pope could bless her. Also, other marshals and FBI agents stood around the family, pointing and yelling towards the family so they would be noticed.

The blessing proved to be a significant improvement for baby Gianna’s health. Kristen tells FOX 29 that Gianna’s story has turned to truly be a miraculous one.

The Pope’s kiss had nothing to do with this. Not that the media cares; they’re acting like the Pope alone is the reason Gianna is still alive. Meanwhile, the chemotherapy Gianna received is practically an afterthought in stories about the family.

I sincerely hope her recovery continues. But if it does, it’ll be because of the medical professional at the hospital, not because of a guy who spent a second kissing a random baby before moving on to take selfies with his other fans.

(Screenshot via Fox29. Thanks to Zack for the link)