At the “Presidential Family Forum” in Iowa Friday night, Carly Fiorina pandered to the Republican base by throwing non-religious Americans under the bus, claiming that faith was a necessary quality in a President: 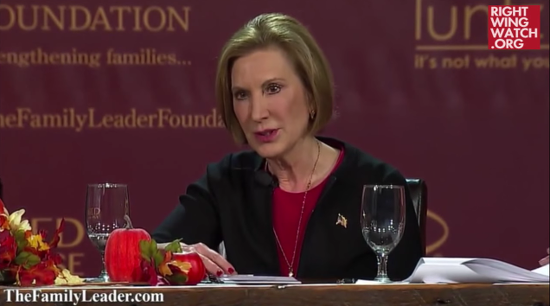 … I do think it’s worth saying that people of faith make better leaders because faith gives us humility, faith teaches us that no one of us is greater than any other one of us, that each of us are gifted by God. Faith gives us empathy; we know that all of us can fall and every one of us can be redeemed. And faith gives us optimism; it gives us the belief that there is something better, that there is someone bigger than all of us. And so I think it’s important that we elect a leader of faith and that we elect a leader, as well, who knows that more prayer, not less, is necessary in public life and in all our lives.

She then proceeded to fire everyone else on stage. (I assume.)

But since Fiorina will say anything confidently, regardless of how accurate it is, let me remind you that her fellow “people of faith” at the event would make life worse for gay and lesbian families if they had the opportunity, have no problem with damn near anyone getting their hands on assault weapons, and think science is a conspiracy. She’s confusing humility with stupidity.

And they’re all fighting for the office once held by George W. Bush, another Christian who wore his faith on his sleeve and then led us into an unnecessary war that we’re still paying for today.

We’ve had plenty of people of faith running this country. How about we elect someone who understands God won’t solve our problems, has the humility to call on experts when making decisions instead of talking to an imaginary friend, doesn’t need false optimism, and knows that the only way there’s something bigger and better in store for us is if we create it ourselves?

November 23, 2015
Chemotherapy Shrank a Baby's Brain Tumor, but Pope Francis is Getting All the Credit
Next Post